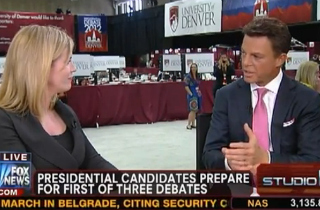 On today’s Studio B, live from the Denver site of the first presidential debate, host Shepard Smith grilled Obama campaign spokeswoman Stephanie Cutter over the administration’s seemingly “messy” handling of the violent attacks on the U.S. consulate in Benghazi, Libya, last month.

“This is a mess,” Smith bluntly said. “It appears that [U.S. Ambassador to the U.N.] Susan Rice was sent out to tell the world on five different Sunday talk shows something that wasn’t true because the intelligence document [we’ve obtained] suggested that the White House knew that intelligence knew in 24 hours this was an attack and not a spontaneous event.”

“These questions are best suited for my former colleagues at the White House,” Cutter quickly responded, adding that “from the moment of the attack, the president was focused on two things: one, making sure our embassies were secure, but, also, getting to the bottom the attack –”

“When you’re president, you’re doing your job 24 hours a day, you know that,” Cutter replied before the two engaged in a bit of polite crosstalk.

“From a campaign standpoint, the suggestion is that the numbers are down on foreign policy,” Smith told Cutter, which elicited her to dismiss such figures — “Come on,” she said.

“The attack on the diplomatic mission in Libya slightly but noticeably chipped away at that lead,” Smith read aloud. “I just wonder if the campaign wouldn’t have preferred maybe they not put Susan Rice out to tell us something that the intelligence sources said was wrong.”

“The campaign doesn’t have anything to do with decisions like that,” said Cutter. “Those are decisions for the White House,” she said, adding that when “a tragedy hits home like this and is a national security issue for the president, politics doesn’t weigh in on it. There is only one person right now trying to play politics with this issue — it is Mitt Romney.” She criticized the GOP candidate for “jumping the gun” and misrepresenting the chronology of events following the Benghazi attacks.

“I understand your criticism on the jumbling of the story line,” said Smith, “but I want to get to the bottom the jumbling of the story line on this matter because this matter of Susan Rice telling us one thing and intelligence knowing something else entirely is a matter that could be very tricky for a campaign and, frankly, could be concerning to a lot of Americans that the president goes off to a campaign event to raise money when we have had the assassination of an ambassador overseas for the first time since 1979.”

“As I said at the beginning, I don’t have access to any information on this beyond what is in the public,” she replied. “I do know how these things unfold where facts become known after the crisis in a matter of days and hours. You cannot predict it. She went out there with the information that she knew at the time.”