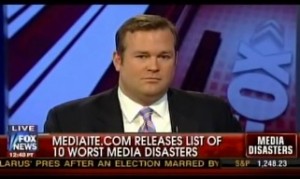 Earlier today, Mediaite Managing Editor Colby Hall appeared on Fox News’ Studio B with Shepard Smith to discuss Brad Phillips’ post that compiled the Ten Worst Media Disasters of 2010. After running down the titular list, Smith gave a boost to the site’s street cred. Not only did Smith correctly pronounce the name of our site (unlike Rush Limbaugh), but went on to observe “It’s not like you guys are always wonderful to us, but I always enjoy reading it.”

Reality isn’t always wonderful to them, either, but it is to Fox News’ credit that they aren’t afraid to acknowledge criticism, and still engage with the source of it.

Here’s Colby Hall‘s appearance on Studio B (from Fox News) in which he discusses Phillip’s Ten Worst Media Disasters of 2010 which originally ran on his MrMediaTraining blog and was repurposed on Mediaite with Mr. Phillips’ permission.)

CLARIFICATION: In response to Brad Phillips’ post here a note: Brad submitted his original post to us which we both agreed to repurpose on the site — we were happy to feature it as one our top stories of Monday, along with his byline and numerous links out to his site.

As the editor of the site I often speak on behalf of stories by a variety of our contributors. I was remiss in not citing Brad by name while doing the television spot, and had I the opportunity to do it again, I certainly would. Thanks for the media training, Mr. Media Training!