Shep Smith To Michael Steele: ‘Have You Focused More On Yourself Than The GOP?’ 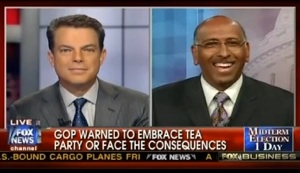 There has been no shortage of drama and intrigue surrounding tomorrow’s midterm elections, but in the face of what’s expected to be a significant night for the GOP is the battle over the soul of the Republican party: Tea Party vs. Establishment or “old school” vs. new. This, then, was the subtext of a recent interview with GOP Party leader Michael Steele conducted by Shepard Smith, who pulled absolutely no punches in asking some very tough questions with the at-times maligned leader of the GOP, culminating in “have you been focusing more on yourself than on the GOP?”

After setting the stage with a rather banal back and forth over the Tea Party vs. the GOP establishment, Smith went for it, asking of Mr. Steele, “you have been criticized for going off to the islands and trying to raise money for yourself and not focusing on the bigger picture.” After Steele replied with his reason for going off to the islands — “going to visit members of our party who are engaged in important elections whether Hawaii where we elected someone or in Guam” — Smith went with the body blows, asking “will you run again.” A surprised Steele could only laugh, though he defended himself well as the discussion turned towards Karl Rove‘s group Crossroads and the National Republican Committee of which Mr. Steele is chairman.

Its a fascinating clip that both seems to set-up Mr. Rove as a candidate to be the next chairman of the NRC (not that he may even want that gig), and serves as another reminder that Shep Smith sets himself apart from his peers when it comes to asking smart, tough questions, and making entertaining (and non-pandering) television.