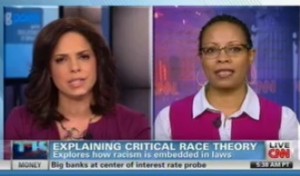 The back-and-forth between CNN’s Soledad O’Brien and Breitbart.com Chief Editor Joel Pollak continued on this morning’s Starting Point, as O’Brien sought to dispel misinformation about the late Professor Derrick Bell and Critical Race Theory, which have been the subject of smears by the Big sites. After a tough interview with O’Brien last week, Pollak’s Big sites went on a vengeful tirade against the CNN anchor, posting a flurry of articles seeking to discredit her, and promoting their warped vision of Prof. Bell.

Last week, Breitbart.com released one of the “bombshell” videos that the late Andrew Breitbart promised at this years secret, a 1991 clip of then-Harvard Law Review President Barack Obama introducing Prof. Bell at a pro-diversity protest, and even (gasp!) hugging him. The idea is that, because Barack Obama admired Prof. Bell, who was the first tenured black professor at Harvard Law, and even embraced him (on video and everything!), all of Professor Bell’s opinions are automatically transferred into Obama through some sort of negrosmosis.

The smear then depends on depicting Professor Bell, who is no longer able to speak in his own defense, as a “radical” and a “racialist,” neither of which is remotely true unless you’re the preacher from Footloose. It’s the same old “scary black man” trope that has dominated certain segments of the conservative blogosphere since President Obama got within spitting distance of winning the 2008 election, and which has been a feature of American politics for eons.

O’Brien brought on Professor Dorothy Brown, author of Critical Race Theory: Cases, Materials and Problems, to explain Critical Race Theory, and to point out that, even though the theory isn’t actually “radical,” there is also nothing in President Obama’s record to suggest that he is an adherent of it.

“Critical Race Theory seeks to explain judicial decisions by asking the question ‘what does race have to do with it?'” Professor Brown said. “It’s that simple and that straightforward. There’s no hidden conspiracy theory behind it. It looks at race in America. We know through our history that race has had a lot to do with judicial decisions and statutes.”

Far from a “radical” idea, this concept has even shown up in this year’s Republican primary debates, from noted black power militant Rick Santorum, and from fellow panther-in-spirit Ron Paul.

Of Pollak, and the Big sites’ attacks on Prof. Bell and the President, Prof. Brown said “I believe what’s going on is the person that was on your show wasn’t going to be persuaded by the facts. He was going to make his own facts up. When he makes statements like that, there’s no evidence in support of it. He talks, if I recall, the Attorney Generals office doing something, but it wasn’t anything specific. I look at this as a smear tactic.”

Apparently, Soledad O’Brien has been getting a lot of “crazy tweets” about her interview with Pollak, so she called on viewers to let it rest. “Critical Race Theory 101,” she concluded. “Stop tweeting me. We have moved on, people.”