Speaker Boehner Plays Down Obama ‘Storming Out’ Of Debt Meeting: ‘It Was Fine’ 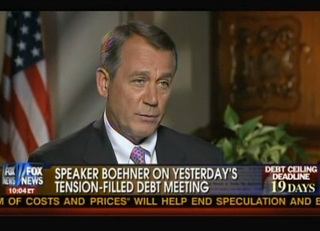 Much ado has been made of the reportedly dramatic exit President Obama made from the budget talk meeting last night, and while several attendees, including House Majority Leader Eric Cantor, have noted that his exit was “abrupt,” today on On the Record House Speaker John Boehner made nothing of the situation, noting that, like everyone else, the President was “frustrated,” but that his exit was “fine.”

Van Susteren then went to the cor question surrounding the exit: did he leave “Appropriately or inappropriately?” The Speaker didn’t using those terms, instead pausing for a moment before answering that it was “fine.” “He decided the meeting was over and got up and left,” he explained,” with plans already in place to meet the next day. He expressed empathy with the President’s frustration, concluding, “my goodness, the rest of us are frustrated, too.”

Conservatives may find in Speaker Boehner’s refusal to use the term “appropriate” to describe the President’s behavior– as well as his lack of reference to the lengthy speech the President was reported to have made– as a sign that he disapproved of the behavior and merely was trying to be diplomatic. Likewise, there is enough in the lack of mention of Majority Leader Cantor for liberals to argue that Speaker Boehner knew his colleague was rhetorically maimed and excluded him for conversation. All in all, another piece of this dramatic puzzle that adds some clarity to the way these meetings are being conducted.