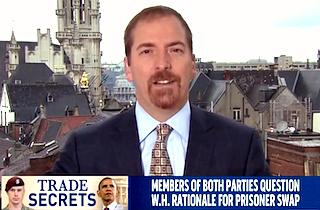 NBC News Chief White House correspondent Chuck Todd reported Thursday morning that the State Department had acknowledged the five Guantánamo Bay detainees exchanged for Army Sgt. Bowe Bergdahl were likely going to be released anyway as the Afghanistan War winds down, and this way we at least “got something for them.”

“Yesterday in her press briefing, State Department spokeswoman Marie Harf suggested something ON THE RECORD that had been hinted at OFF THE RECORD or ON BACKGROUND for days,” Todd wrote. “That the five Taliban prisoners who were released in exchange for Bergdahl were probably going to be released anyway, because they weren’t among those who were slated for prosecution.”

“There are three buckets of people in Guantánamo that remain,” Harf said. “There are those who are approved for transfer. That’s 78. There are about 30 who have been referred for prosecution in some way. These five are in that middle bucket and were unlikely — might have been, but unlikely — to be added to the group that was going to be referred for prosecution. So it is quite likely that eventually, in line with our commitment to close Guantanamo Bay, they would be transferred. …We should get something for them.”

On Morning Joe Thursday morning — before this happened — Todd made the point that the White House’s prime motivation behind the transfer was to begin the “emptying out” of GITMO, and that they had been hoping Bergdahl’s release would distract from that. Bergdahl indeed became the story, but not in the way the White House anticipated.