Stephen Colbert: Mitch McConnell Has A Plan To Cut Off GOP’s Nuts Caught In A Vise 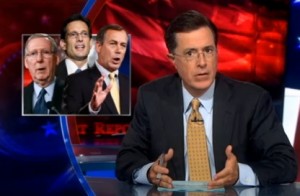 The current negotiation between President Obama and House Republicans over raising the debt ceiling can, at times, be a difficult story to follow. The seeming disparity between discussions behind closed doors and public statements of pea-eating and reports of individuals storming out of those discussions leave any concerned citizen confused and frustrated. Thankfully, we national treasure Stephen Colbert, who last night effortlessly cut through the rhetoric and posturing to tell his audience what was really going on: this negotiation has the GOP’s nuts caught in a vise, but Sen. Mitch McConnell has a plan to cut them free.

After setting up the entire story, which culminated with the GOP having their nuts caught in the vise, Colbert ran a clip of McConnell saying “the president has presented us with three choices: smoke and mirrors, tax hikes or default. republicans choose none of the above,” to which Colbert offered that “coincidentally, ‘none of the above’ is also the leading republican presidential candidate.

Colbert then offered the following simple and easy to follow description of McConnell’s strategy, saying:

To keep the Republicans from being blamed for raising taxes or defaulting all they have to do is ask the president to submit a request to congress to raise the debt ceiling. Then, vote yes on a resolution disapproving of the thing they asked the president to do. Then, Obama would veto the disapproval, and since the republicans don’t have the two thirds majority to override the veto, the debt ceiling gets raised and the Republicans get to say they voted against it. Twice.

Why is this a brilliant strategy? As Colbert continues:

The GOP gets everything they want, except anything they asked for. And Obama gets stuck with what he wanted to begin with. And McConnell has gotten their nuts out of that vise — by cutting them off and leaving them behind for Obama to hang from his rear view mirror as an air freshener.