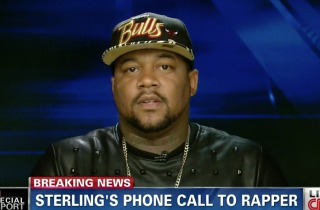 In an exclusive interview with CNN’s Don Lemon, Maseratiet, a self-described friend of LA Clippers owner Donald Sterling and his former escort provider, asserted that he did not believe the NBA team owner was racist until recently. Maseratimet confessed that he’s known Sterling for “five or six years” and used to consider him a friend, but Sterling’s recent behavior led him to record their conversations and release them to the press.

“How’d I meet him? That’s a good question,” Maseratimet said when pressed. After noting that Sterling “likes to have fun” and enjoys being around women, Maseratimet finally confessed that he ran an escort service in Las Vegas that Sterling patronized.

“He didn’t show no sign of racist to me,” Maseratimet said. “He seemed, you know, straight cool.” When prodded by Lemon, Maseratimet said that Sterling did prefer “light skinned” women of color.

Maseratimet confessed that he was “upset” when he heard the tapes and reached out to Sterling for clarification. He added that he recorded those conversations with Sterling and confessed that he is behind the release of every recording of Sterling besides the original Stiviano tape.

Maseratimet assured Lemon that he never received compensation for releasing those tapes. After playing the tapes, Maseratimet said that he was shocked that Sterling said what he did.

“I’ve known him to always want a woman of color and to say what he said just – it just threw me off big time,” the escort provider confessed. “So, now I do believe he is a racist.”

“You don’t speak that type of language and not be racist,” Maseratimet continued.

Maseratimet said that he no longer considers Sterling a friend after hearing his comments.