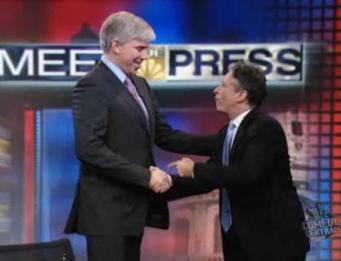 While his Sunday show competitor was appearing on Fox News last night, NBC’s Meet the Press moderator David Gregory was a guest on The Daily Show.

After more than three minutes of jokes about their kids, the duo got down to serious issues – with the tone in the political debate, and what the media’s responsibility is.

Gregory dismissed the idea that the discontent toward Obama is racism:

With the President, it’s not as much racism as it is people feeling like government is out of control. The President has to be able to step up and somehow be bigger than that. On the one hand he tells some of his aides, ‘Why are you watching so much cable,’ but that’s part of the problem. he wasn’t tuned in enough to the idea that he could laugh off certain things. Say, ‘Nobody’s going to believe that.’ Well guess what, there were enough people apparently believing certain things to create enough noise and he is saddled with that.

“Can the news media then become more active in squelching down irrationality, or attempting to,” asked Stewart.

“We have an obligation to talk about what’s fact, what is fiction, what is real,” said Gregory.

Stewart continued to drive the point about those on the right who talk about Death Panels and other terms that have become talking points in the take downs of the President. “I think they are playing to a base of people who believe that government is out of control and that government is doing something to you rather than for you,” said Gregory.

Although Gregory didn’t name names, the ‘government is doing something to you’ mantra is pure Glenn Beckian philosophy. However as the MTP anchor hammers home the concept of an anti-government sentiment and not an anti-Obama sentiment, it’s sounding more like a validation of what Beck has done – and what the White House has been forced to respond to.