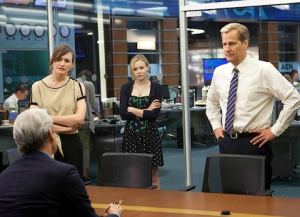 It’s “NewsNight 2.0″s one-year anniversary party, and everyone is feeling very fond, both of each other and of themselves. Guitar Hero is played. Weed is offered to Will by Neal’s girlfriend, and Neal is not promptly fired. Charlie takes a phone call from a mysterious source (who is not so mysterious that he can’t stick around for a mini lecture) who promises him a big scoop later that evening. Charlie rounds everyone up, including Jim, who has just told Lisa he loves her even though he doesn’t, and Maggie, who was there for all of it because she is constantly quarterbacking their relationship.

Meanwhile, Elliot, Don and Sloan are in the relatable and infuriating position of being stuck on the tarmac after a flight, able to see the gate but unable to disembark. They gradually ascertain that something big is happening, and their frustration is amplified as it becomes clear that the White House is going to report that Osama bin Laden has been killed in a clandestine operation in the middle of the night. Don gets into a pissing contest with a flight attendant who refuses to let him change seats. All of these antics manage to be amusing, thanks to the actors. Give these three their own show.

Back at the studio, Mackenzie and Charlie are duking it out over when to break the story — Mackenzie wants to move forward once she confirms with two sources, while Charlie doesn’t understand why they can’t let the White House make their own announcement. It turns out that in 1991 he chased a story so aggressively that he ended up inadvertently assisting with a missile attack on American soldiers in the Middle East. In the face of that story, not even the stoned and giggly Will (incidentally, my favorite version of Will) wants to argue with him. In exchange for sharing that story, Charlie gets to tell everyone in the studio the news, and most everyone breaks into applause. The only sour faces in the room are Neal’s girlfriend, whose dad died in the towers, and Kendra, whose story is apparently not worthy of any further attention.

Mackenzie throws her weight around, nastily, with a DC anchor who wants to break the story — apparently, it must be Will McAvoy, the apparent “face of ACN” (!), who reports the news. While this is going on Maggie continues to involve herself in Lisa and Jim’s relationship, commanding Jim to break up with her. Before he can, Lisa dumps him, because she sees that he’s not as into it as she is but is too nice to say otherwise. Later she tells Maggie she did it because she saw Maggie’s face when Jim said he loved Lisa. Lisa is too nice.

The group on the plane is getting more and more agitated, and Don comes close to a physical fight with the flight attendant and captain, until he sees their United flight crew name tags and realizes the origin of their jumpiness/adherence to rules. He tells them that Osama bin Laden is dead. Hugs all around. Will gets the go-ahead to break the story from Joe Biden, because of course they used to play softball together and the
“NewsNight” team is the most well-connected in history. Jim asks out Lisa again. It looks like Sloan and Don might have some chemistry together. Sucks to be Maggie!