TMZ Grills Goodell: We Got Ray Rice Video with One Phone Call, Why Couldn’t NFL? 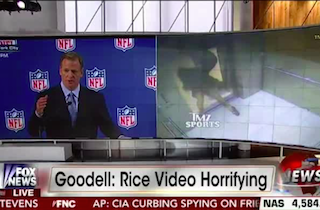 TMZ Sports, the site that made a big name for itself earlier this month when it released casino elevator surveillance footage of Baltimore Ravens running Back Ray Rice punching out his then-fiancée, made its way into the press conference with NFL Commissioner Roger Goodell on Friday and pressed him about why they were able to obtain the video when he apparently was not.

“You suspended Ray Rice after our video,” TMZ’s Adam Glyn asked Goodell. “Why didn’t you have the curiosity to go to the casino yourself?”

Goodell reminded Glyn and others that the NFL did suspend Rice (for just two games) when the initial video of him dragging his now-wife’s unconscious body out of the elevator appeared.

“When the second video came out last week, that’s when we increased our discipline because that was inconsistent with the information we had,” he explained, adding that the NFL did not want to “interfere” with the criminal investigation by going directly to the casino for the video.

“I can’t explain how you got the information, only you can do that,” Goodell replied, smiling.

Shortly after TMZ posted the Rice video online, the Associated Press reported that law enforcement had actually sent that same tape to the NFL months earlier, a claim that Goodell continues to deny.