TMZ’s Harvey Levin to Kurtz: Fox Has Been ‘Spoon-fed’ Our Stories for Years
VIDEO

TMZ’s Harvey Levin to Kurtz: Fox Has Been ‘Spoon-fed’ Our Stories for Years 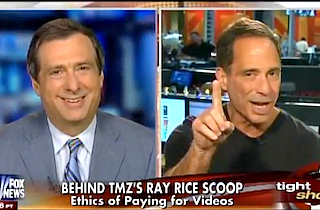 TMZ founder Harvey Levin didn’t give an inch in an interview with MediaBuzz’s Howard Kurtz Sunday morning, disputing characterizations of his website as a trashy tabloid and dismissing concerns that TMZ paid for videos as par for the course.

Levin thought all these “how does TMZ get all these scoops” questions were goofy. “We’re a news operation!” he said. “That’s what you’re supposed to do as a news organization, is track down stories.”

He also was not pleased with the implications of Kurtz’s theory that Levin was trying to use videos to burnish TMZ’s reputation from a tawdry tabloid. “If you look at all the stories we’ve broken, they’re stories that literally every newscast in America has put on their air,” he said. “So I would take issue with the way you’re describing it, because if that’s the case you guys have been spoon-fed this stuff over at Fox News as well as everyone else for nine years. You’ve been taking all of our stories.”

Neither was Levin happy when Kurtz tried to guilt him over paying for videos. Levin distinguished between paying for video and paying for interviews, and argued that major news outlets do the former all the time. “You’re not really arguing that Fox News pays for videos, are you?” Levin asked Kurtz incredulously. “By the way, there’s nothing wrong with it.”