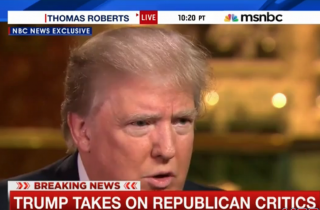 For those who didn’t watch Donald Trump‘s lengthy interview with NBC’s Katy Tur this afternoon, here’s a one-sentence summation: The Republican candidate constantly chided and condescended to his interviewer, talked smack about his critics, and repeated all the same claims he’s made about Mexico over the past few weeks.

And when Tur asked whether he owns a gun, the following exchange ensued:

TRUMP: I have the license to have a gun, yes, I do.

TUR: Do you own one?

TUR: Do you use it? Gun range?

TRUMP: What are you talking about?

TUR: Stronger background checks? What about that? Is there any steps that you would take to make it harder to get a gun in this country?

And then came Trump’s time to bash all his famous conservative critics.

On Jonah Goldberg, who compared him to a “failed man”: “I’m worth a fortune. You know, it’s interesting. I went to the best school, got great marks, everything else. I went out, I made a fortune, a big fortune, a tremendous fortune… bigger than people even understand. […] Then I get called by a guy that can’t buy a pair of pants, I get called names?” [Ed. note: Huh? Does anyone know why Trump would think Goldberg can’t buy pants? Send tips to tips@mediaite.com]

“By the way,” Trump smirked at Tur, “are you going to mention the ones that do like Trump? No, you don’t do that.”