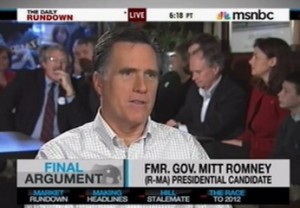 During his interview with The Daily Rundown‘s Chuck Todd, Republican presidential candidate Mitt Romney was asked, for the umpteenth time, to try and talk his way around the individual health insurance mandate that he enacted as Massachusetts Governor, and supported on a national level (although he denies it, he did). While talking in a series of concentric circles, Romney spitballed the idea of having “clinics where people are treated at low cost or no cost” as a solution to federal laws about urgent or emergency care.

Romney, along with chief rival Newt Gingrich, has been running as hard as he can away from his prior support for a national individual health insurance mandate, but the subject comes up in interview after interview. When Chuck Todd asked Romney about it one more time, the former Massachusetts Governor did the dance that has become familiar to voters, with a new step thrown in.

The individual mandate is such poison to GOP voters that it’s not enough for Romney to convince them that he never advocated it as a national policy (which is a bald-faced lie). He must also convince them that, even though he thinks it was a good idea for his state, he doesn’t think it’s a good idea for other states. It’s like threading a needle with a gym class rope.

MSNBC’s Chuck Todd zeroed in on this hairball of contradictions, asking Romney about his description of the mandate as a conservative idea, rooted in “personal responsibility.”

“Do you still believe a mandate is a conservative idea, the idea of the personal responsibility aspect?” Todd asked.

Romney responded that “there were two options in my state. One was to continue to allow people without insurance to go to the hospital and get free care paid for by government, paid for by the taxpayers,” while the other was his Romneycare mandate. “Given those two options, the option that we chose was a more conservative approach.”

The “two options” laid out by Romney, though, are the same for every other state. Federal law mandates emergency care, regardless of citizenship, legal status or ability to pay. Logically speaking, Romney should be advocating that solution for all states, if not on a national level.

Todd asked Romney to explain a major flaw in his state-by-state approach. “Are you concerned, though, that that could create, and I know this is an awkward term to use, sanctuary states, where some states are going to just cover more people than other states? Massachusetts versus a Mississippi, say?”

This is where Romney runs into some trouble, as he seems to explain that a state-by-state approach is okay because of the emergency care mandate he just got done denouncing. “Well, that’s something that would be worth looking at for any state to consider. People have to look at Massachusetts and to see what the record has been of its experience. But my own understanding is that, under federal law, people are able to get covered. Virtually in any state in America, someone that is seriously ill can go to the hospital and get treated even if they can’t pay for it.”

“So how do we stop that?” Todd asked. “That’s how the mandate came in, right?”

Here’s where Romney seems to suggest government-run clinics, although it’s unclear if he means on a federal or state level. “That’s how it arose, how do we get individuals to take responsibility for their own care. There are a lot of different models. One is to have clinics where people are treated at low cost or no cost. The other is to do as I suggest, which is to have, if you will, tax breaks given to people who have insurance.”

Unfortunately, Todd didn’t get to follow up, but since Romney was talking about solving the “problem” presented by the federal emergency care mandate, it’s fair to assume he meant the clinics as a national solution, either federally or state-by-state. It’s a decidedly “progressive” solution, but I don’t think even the most liberal Democrat would propose having Americans get free health care from government-run clinics. Romney might be on his own on this one.