Why Does Trump Love Fox & Friends So Much? Because It’s the Media Equivalent of Donald Trump 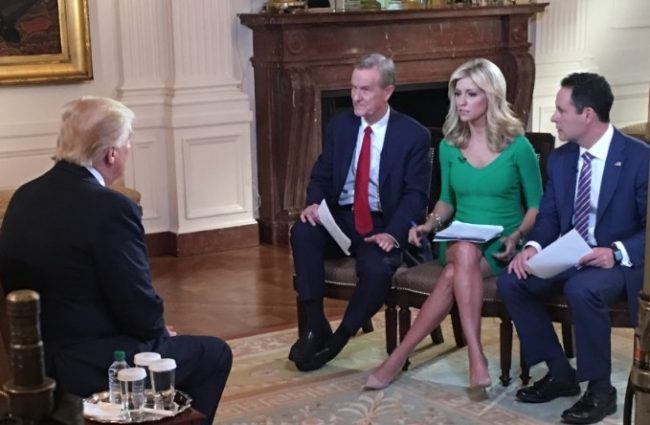 It’s no secret that President Trump has had a contentious relationship with the media ever since it became apparent that the billionaire businessman and reality TV star actually stood half a chance at becoming the Republican nominee for President of the United States.

But with all the hostility directed at the President by the unhinged members of the media, and vice versa, there is one show that Mr. Trump seems to have a particular affinity for – Fox News‘ morning show, Fox & Friends.

Mr. Trump often takes the time to show some love for his favorite cable news show via his favorite form of communication, Twitter:

Great reporting by @foxandfriends and so many others. Thank you!

Such amazing reporting on unmasking and the crooked scheme against us by @foxandfriends. “Spied on before nomination.” The real story.

For a man who spent his entire campaign speaking to massive crowds of adoring followers, suddenly the attention on the President was all-negative-all-the-time. And, as we know, Mr. Trump’s approach toward others is simple – if you like him, he likes you. If you don’t support him,  you are a “loser”.

Like Mr. Trump, Fox & Friends (and Fox News in general) understands that there is actually a part of America that exists in-between the Hollywood Hills and the upper east side of Manhattan. There is a land filled with “angry white men” in pick-up trucks who not only vote, but they own TVs as well.  And while other media outlets and clueless politicians openly showed disdain for middle America, both Donald Trump and his cable news counterpart found a way to show respect to the geographically overwhelming, yet seemingly forgotten, majority of the country.

The Trump campaign was plagued by absurd accusations of racism, sexism, homophobia and any other kind of “ism” and “phobia” critics could find. Combine that with the often childish spats with “Little Marco” and “Lying Ted” and it often seemed to many that Mr. Trump was conducting an angry, hostile bid for the White House.

But without the filter of the mainstream media, much of America actually viewed Mr. Trump’s campaign message in a positive light. “Winning” and “Making America Great Again” were the themes that came to define the Trump campaign. And all the negativity on Trump’s part was merely retaliation for personal attacks launched at him.

In an industry that thrives on doom and gloom, people enjoy a little positivity and yes, even some simplicity.

That is not to say that the Trump voter or Fox & Friends audience is “simple”, although many on the smug left would beg to differ. It simply means that sometimes people don’t want to be talked down to, insulted or patronized. Mr. Trump spoke to America the way Americans speak to each other. He was the New York billionaire who was the antithesis of a New York billionaire.

Fox & Friends also understands that sometimes people just want to be entertained. They want to watch poodles dance and jump through hoops rather than hear more rambling about alleged Russian hacking. They want to watch the hosts race lawn mowers, take the tough mudder challenge or watch the summer concert series.

Both Donald Trump and Fox & Friends decided that they were going to remember the Americans that the the rest of the media and the political elites forgot.