Marco Rubio: Obama and Bush Were Wrong About Putin 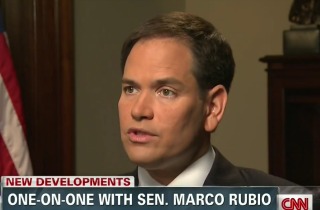 In an interview with CNN host Jake Tapper on Tuesday, Sen. Marco Rubio (R-FL) addressed the ongoing crisis in Eastern Europe where Russian troops are amassed on the border of an increasingly unstable Ukraine. Rubio said that both Presidents Barack Obama and George W. Bush misunderstand how Russian President Vladimir Putin views the world and they need to reassess their approach to the Russian executive.

“How do you see Putin?” Tapper asked Rubio. “Is he a threat to the United States?”

“He very clearly views the end of the Soviet Union as a tragic thing that happened, and I think he views himself as a historic figure that’s going to restore Russia to its rightful place,” Rubio replied.

RELATED: Pat Buchanan Is Pretty Sure God Is on Putin’s Side

“I think he views himself as a historic figure that’s going to restore Russia to it’s rightful place, in his mind, as a global power and the beginning of that is basically to have influence, and leverage over all of the countries their near abroad,” Rubio continued.

“The approach this administration has taken, and somewhat the Bush administration, is to try to convince Putin that this is not a win/lose proposition,” he added. “That Russia could benefit as well as the U.S. He clearly hasn’t bought into that.”

“He views this whole scenario as a zero sum game; either they win or we win,” Rubio concluded.