Gov. Scott Walker Might Go Back to School to Earn College Degree

Gov. Scott Walker Might Go Back to School to Earn College Degree 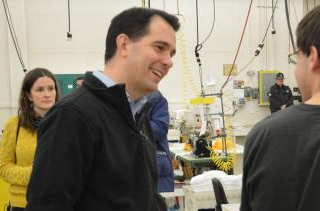 Picture this movie trailer narration: “Scott Walker had it all: the governorship of Wisconsin, the adoration of the Tea Party, even the ability to stick it to some teachers’ unions. But when he wanted to run for president (it may actually happen in 2016), he ran into one problem: Ain’t no one gonna elect a president without a college degree in this day and age.” (The last president without a college degree was Harry Truman, and he wasn’t even elected to his first term.)

Today at a press event, the governor announced that twenty-four years after he dropped out of Marquette University as a senior, he’s considering finally completing that degree. According to POLITICO, Walker claimed he was a triple major in political science, philosophy, and economics (you mean PPE, Walker?), before leaving the school in 1990 a few credits shy of a diploma. His one problem: the school he’s looking into, the University of Wisconsin System’s FlexOption program, only has technical courses such as “engineering, health care and information technology-related fields.”

And everyone crossing their fingers for some wacky, nerdy comedy adventure — where Scott Walker joins a study group full of nerds and learns lessons about friendship and genre films — can uncross their fingers: Walker going to wait.

“At some point, hopefully by next school year, they might start offering other courses beyond those,” he said. “None of those are in my area of expertise, but I’d love to in the future be one of the students.”

Can you humble readers come up with a title for this wacky Tea Party/college comedy film in the making, and how well would Scott Walker fit into Alpha House?