Fox’s Bolling And Gutfeld Throw Down Over Obama’s NSA: ‘You’re Being A Hypocrite Because Bush Isn’t In Power!’ 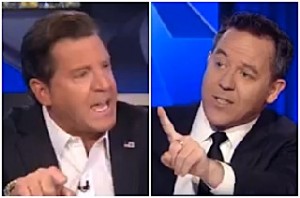 After giving President Obama the benefit of the doubt yesterday on the NSA surveillance measures that some of his colleagues on The Five think violate the Fourth Amendment, Greg Gutfeld opened today’s show by slamming the “M.I.A. president” for “ducking questions” and failing to properly defend those very policies. But soon, Gutfeld was once again sparring with Eric Bolling over what’s more important, security or liberty.

Picking up where Gutfeld left off in his opening monologue, Kimberly Guilfoyle said, “we have been focusing on searching for” NSA leaker Edward Snowden, “but what about leadership? What about our president? Why doesn’t he get up and say something about any of this? There is a lack of faith and confidence from the American people in the government.”

While all of The Five‘s hosts could agree that President Obama needs to be more upfront with the American people about the NSA programs, the arguments started erupting when the discussion turned to Snowden. Juan Williams said “he’s not my hero” and despite the fact that many Americans think he did the right thing he “should be prosecuted.” He added, “He broke the law. And if you are going to be a hero, you’re going to do martyrdom, you are going to have to pay the price and part of the price is here being prosecuted.”

Bolling proceeded to read aloud from the Fourth Amendment, which led to a shouting match between him and Gutfeld over whether the NSA data collection infringes upon those privacy rights. Gutfeld told his co-host that he was “confusing” two different things in his assessment and Bolling shot back “Stop it! This is the fourth day in a row you’re telling me I’m confused.”

Williams was forced to step in and break up the fight, exclaiming, “I think the big dogs are barking. The two of you–what is going on here?”

But that didn’t stop Gutfeld, who continued tearing into Bolling, saying “you can believe it’s wrong but it’s not unconstitutional.” He added, “you are being a hypocrite because Bush isn’t in power. You’re jumping all over Obama.” When Bolling said Obama has “exploited” the Patriot Act, Gutfeld shot back, “this is partisan argument, not a principled one.”