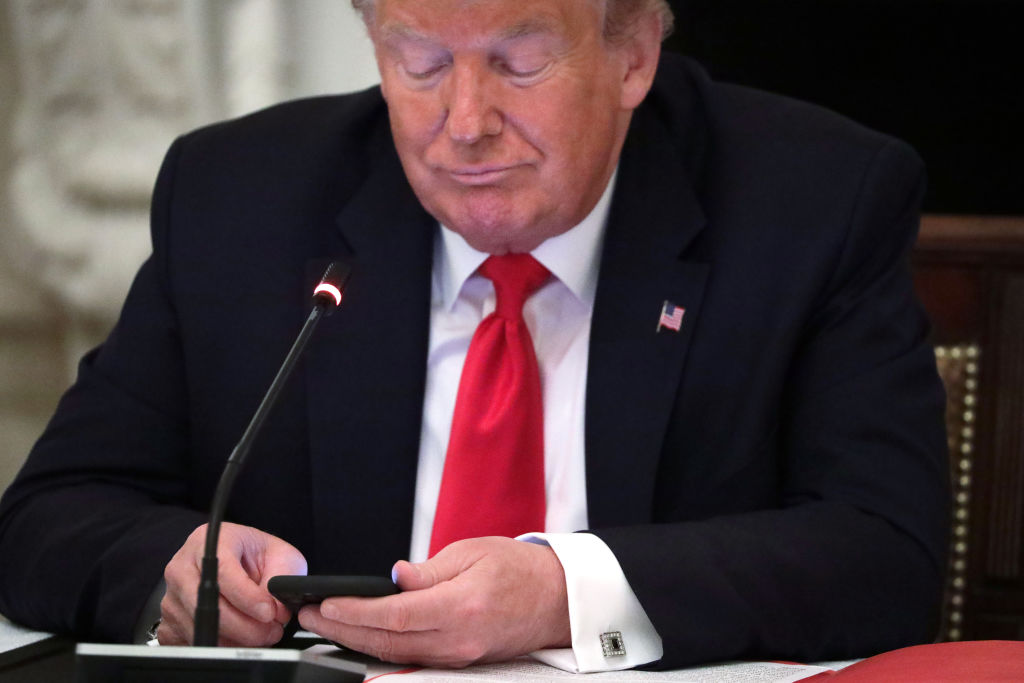 The Trump campaign app is being used to access a broad swath of users’ personal data and to spread misinformation, says a report by the MIT Technology Review, raising concerns about privacy and security.

The analysis, which reviewed the apps promoted by the campaigns for both President Donald Trump and former Vice President Joe Biden, found both apps were collecting “massive amounts of user data” with the goal of sending targeting messages directly to likely voters, “without needing to rely on major social-media platforms or expose themselves to fact-checker oversight” — although Trump’s app accessed far more personal data than Biden’s.

The Official Trump 2020 app has been downloaded nearly 800,000 times and requires new users to provide when signing up to submit not only their cell phone number — itself a valuable piece of information — but also their full name, email address, and zip code. The app requests further permissions to access their phone’s identity, calendar, contacts, call history, location, and even control over its Bluetooth function.

The Trump campaign app scoops up massive amounts of information, including your identity, your location, other accounts on your device and even your phone’s Bluetooth. Here’s a side by side comparison with the Biden campaign app.https://t.co/6F0NCRebLr pic.twitter.com/j84qpDxkDH

It’s a stunning amount of access, and the combination of Bluetooth and location data gives the campaign the ability to capture even more data and more precisely target both users and non-users with political messages:

The use of Bluetooth is especially notable because it can capture data and target people with political messages as they travel through a physical space. This practice has jumped to politics from the advertising industry. In one recent example, Bluetooth beacons (the radio transmitters used to track cell-phone users via Bluetooth signals) were found in campaign yard signs. In another, people were surveilled using these practices when they went to church. Our team has been exploring how this phenomenon—which we term geo-propaganda—has increased.

As you walk past a beacon embedded in a campaign sign or some other part of the physical environment, you are recorded and identified through Bluetooth or similar means. This data is then used to build a profile that can be used to advertise to you or people like you.

Trump’s rally in Tulsa, Ok may have been a disappointment regarding turnout — despite the campaign’s bragging that a million people had requested tickets, not quite 6,200 people actually showed up, leaving the 19,000-seat area with many noticeably empty seats — but those million signups delivered the campaign its “biggest data haul” ever, as Trump campaign manager Brad Parscale bragged in a pre-rally tweet.

The Trump app also raised concerns for how it pushed not just the expected campaign talking points, but also “highly questionable or entirely disproven information”:

The app has “News” and “Social” tabs offering carefully selected feeds of tweets and articles that reinforce the campaign’s talking points, often actively deceiving readers with highly questionable or entirely disproven information under headlines such as “Media Continue to Spread Debunked Theory About Tear Gas,” “Media Mask-Shamers Keep Getting Caught Breaking Their Own Rules,” or “Top 8 Moments from Joe Biden’s Embarrassingly Disastrous, Epically Boring Livestream.” Most messages, articles, and announcements inside the Trump app have no named author; they rarely cite sources beyond government press releases and tweets from Trump’s own supporters and White House staff. The app also has campaign releases that attack social-media companies like Twitter and Snapchat, berating them for perceived bias and lack of transparency on one hand while adopting opaque and attention-driven strategies themselves.

Twitter has slapped Trump’s own tweets with a warning label multiple times, and removed several videos created by supporters that he retweeted for copyright violations, drawing the president’s ire against the social media platform. Being able to push out information — and in some cases, misinformation — directly to his supporters, without any outside company being able to restrict or prevent it, is a major function of the Trump app.

MIT Technology Review analyzed the Biden app, Team Joe, as well, and found that its main function was what it called “relational organizing,” encouraging supporters to use the app to contact people they knew and persuade them to vote for Biden. The app does request access to a user’s contact lists in order to optimize this function, but was generally requesting access to less information and at a lower level than the Trump app.