Joe Biden Mistakenly Praises Neighboring State While at NH Campaign Stop: ‘I Love This Place. What’s Not to Like About Vermont?’ 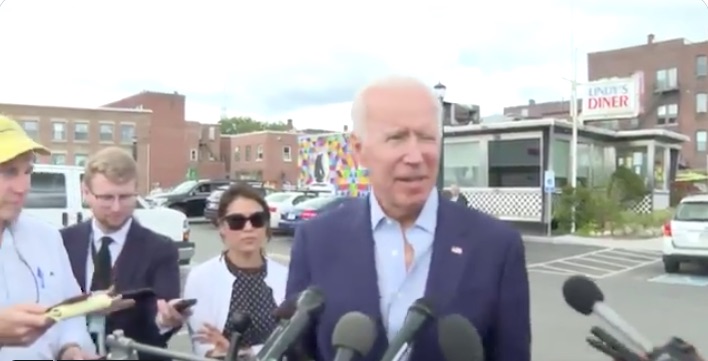 At a campaign stop in Keene, New Hampshire, 2020 Democratic candidate Joe Biden mistakenly thought he was in a neighboring state and praised the beauty of Vermont to political reporters: “I love this place. Look, what’s not to like about Vermont in terms of the beauty of it?”

Biden talks w/press in Keene, NH: “I love this place. Look, what’s not to like about Vermont in terms of the beauty of it? And what a neat town…everybody has been really friendly. I like Keene a lot.” pic.twitter.com/0hKsgiDfwM

Biden’s slip-up is just the latest in a string of verbal mistakes on the campaign trail. Earlier this week, Biden incorrectly claimed Sen. Robert F. Kennedy and Dr. Martin Luther King, Jr. were assassinated in the “late ’70s” instead of 1968. Three weeks ago, he falsely claimed, and then repeated, that he was still vice president in 2018, when the Parkland mass shooting occurred.

But it’s not just press scrutiny that make Biden’s verbal mistakes go viral, Republicans and members of the Trump 2020 election team are naturally quick to seize on each “gaffe” and push it online, as they did with his “Vermont” mistake.

Joe Biden doesn’t know what state he is in.

While in Keene, New Hampshire, he said: “I’ve been here a number of times… I love this place. Look, what’s not to like about Vermont in terms of the beauty of it?” pic.twitter.com/3DjOYuHfSx

Dem candidates are going to New Hampshire early and often because of its important primary. Everyone knows this.

Biden thought he was in Vermont. https://t.co/Iy0XUHLLO2