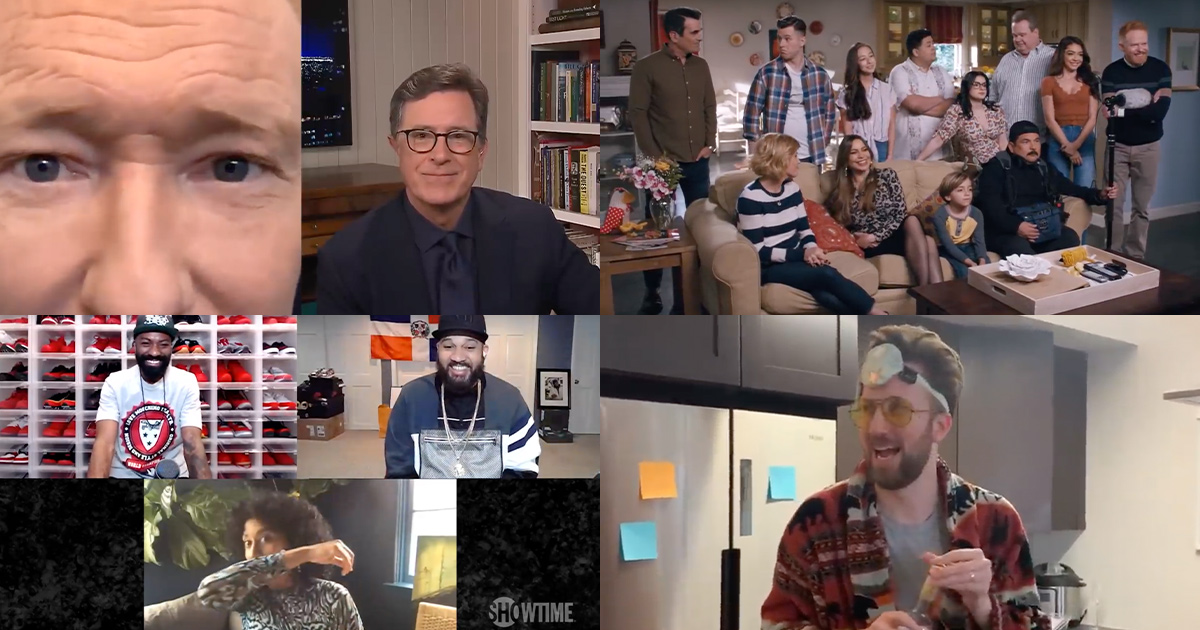 This is week three of all of late night stopping normal production during the coronavirus pandemic. But hosts have continued doing shows from home and brought in plenty of special guests to entertain viewers. We’ve put together some of this week’s highlights below:

Jimmy Fallon and Justin Timberlake have one of the most fun bromances in late night, and this week Timberlake joined Fallon for more silly antics, including an off-the-wall “quarantine remix” and a reflection on their long friendship going back to the 2002 VMAs. (Timberlake also talked about Trolls World Tour — which Universal decided to release on demand Friday if you’re looking for a movie to watch with the kids.)

Stephen Colbert and Conan O’Brien decided to try out a little experiment this week. They both recorded each other for interviews, then took the videos, gave them to their show’s respective teams, and released basically the same interview, with various differences in the content and the edits. The most notable one concerns some parody Bob Dylan song lyrics Colbert shared with O’Brien that TBS was cool with but CBS was absolutely not.

This week saw the season finale of the long-running ABC hit show Modern Family. Jimmy Kimmel brought on the cast for a big farewell talk about bringing things to an end after 11 long years. Kimmel also helped reveal the identity of the documentarian who’s been behind the scenes this entire time…

This week Seth Meyers introduced a new segment for his at-home show called Who I Miss, in which he highlights members of his crew he misses working with directly. This week Meyers spotlighted Donna Richards, the woman in charge of his wardrobe (“more quick and skillful with a lint roller than Zorro is with his blade”), and Tom Ucciferri, Late Night’s back-of-house stage manager (“nothing calms anxiety better than standing next to a pro”).

Daily Show correspondent Jordan Klepper, stuck at home like the rest of us, found an escape of sorts in talking to the operations officer of Fortitue Ranch, a survivalist bunker stocked up in case doomsday arrives soon — or, failing that, how to adequately prep at home.

Samantha Bee spoke with Congresswoman Katie Porter following her confrontation last month of the head of the CDC about free coronavirus testing. Porter — in addition to hitting Republican “bullshit” — continued raising the issue of Congress needing to be able to work remotely. Right now, she explained, “what Congress is doing right now is trying to learn how to mute and unmute their telephones.”

With OANN being a continued presence at White House briefings, John Oliver took on the network and some of its more colorful personalities, including correspondent Chanel Rion, who has continued to appear at White House coronavirus task force briefings after being expelled by the WHCA for violating policy set for following social distancing guidelines in the briefing room.

Black-ish star Tracee Ellis Ross joined Desus & Mero to catch up on everything from quarantine hair (and beard) care to appropriate at-home attire to the massive wall of sneakers Desus has. Ross had to clear her throat at one point and they ended up turning “coughing into your arm” into the latest dance craze.

Spade this week briefly addressed Comedy Central cancelling Lights Out and told viewers he’s gonna keep doing these “lo-fi” shows for the time being. And this week Lights Out shared an interview Spade conducted with the one and only Robert Downey Jr. (Okay, not really, it was a deepfake, and a very eerie one at that.)

Next week Fallon, Colbert, and Kimmel will be co-hosting the One World: Together at Home special, crated in collaboration with Lady Gaga and featuring some big names like Andrea Bocelli, Elton John, Kerry Washington, and Paul McCartney.