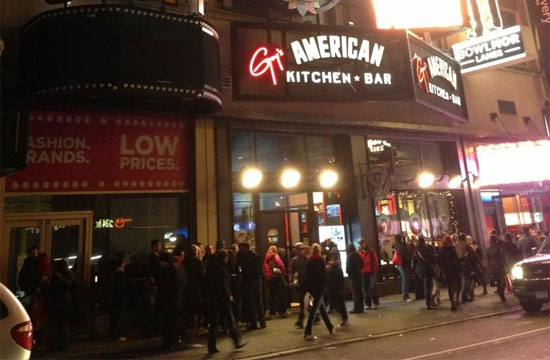 Twitter: Someone, quick, capture Guy Fieri and subject him to scientific experiments in a shadowy government lair! Blogger Adam Roberts snapped this photo of the oddly long line outside of Guy’s American Kitchen and Bar, showing that absolutely nothing has happened since The Review. We could create a vaccine for cancer out of Guy Fieri.

Grub Street: Furious with the Affordable Health Care Act’s mandate that his business’s health insurance cover female contraception, Domino’s Pizza founder and Super Catholic Tom Monaghan filed a 40-page lawsuit against the federal government for violating his religious beliefs. Oooooooh! This filing’s a double whammy of First Amendment “freedom of religious expression” interpretation AND Executive Powers issues! We would really love to see The Pizza Cases become A Thing in the Supreme Court. (Some of us are law nerds.) Side note: is this issue going to become the new Chick-fil-A Gay Marriage Clustercluck?

Eater: Will Ferrell hosted his third official Cancer for College Pub Crawl in San Diego last weekend, held in honor of his college buddy, a cancer survivor, with all proceeds going to college scholarship funds for young cancer survivors. As you might imagine, it was a classy affair, San Diego.

Village Voice: ChowHound’s co-founder Jim Leff has apparently fallen victim to some unfair reporting by The New York Times. He wrote a post on his new blog about knowing Nancy Lanza, mother of Adam Lanza, the shooter behind the grizzliest elementary school massacre to date in Newtown, CT on Friday. The New York Times swiftly called Leff for comment after his blog post went up, of which he provided none, leading the Times to “lift quotes” off his blog, print them out of context, and paint a less-than-flattering portrait of Nancy Lanza, which understandably upset Leff.