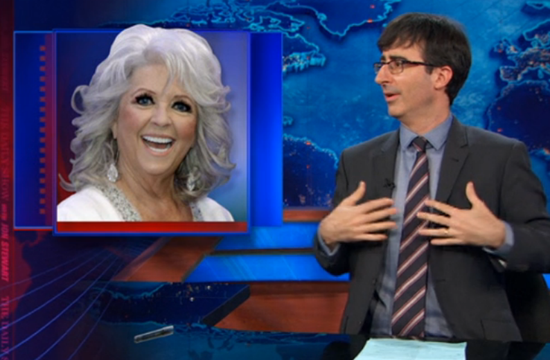 We think John Oliver’s doing an admirable job of taking over The Daily Show while boss Jon Stewart has disappeared to direct a political movie. Case in point: this clip from last night, where he savaged Paula Deen for her recently-revealed oblivious racism.  Of course, Oliver’s shocked that Deen didn’t use the n-word while singing along to the Wu-Tang Clan, but the well-worn path of “Paula Deen Fat Butter Jokes” gets a refreshing jolt from the British comedian, as well as a Chris Rock-inspired reason that he can use the n-word, while Deen can’t: “I would ask you to look at the picture [of Rock] and try to figure that out, but I’m worried that you might just get confused as to why he’s not wearing a white jacket and black bow tie.” He then invites correspondent Jessica Williams to discuss the possibility that Deen suffers from “either Type-1 or Type-2 Racism.”

Oliver, if your boss ever fires you for being British, you always have a welcome home here. Check out parts one and two of his smackdown below.