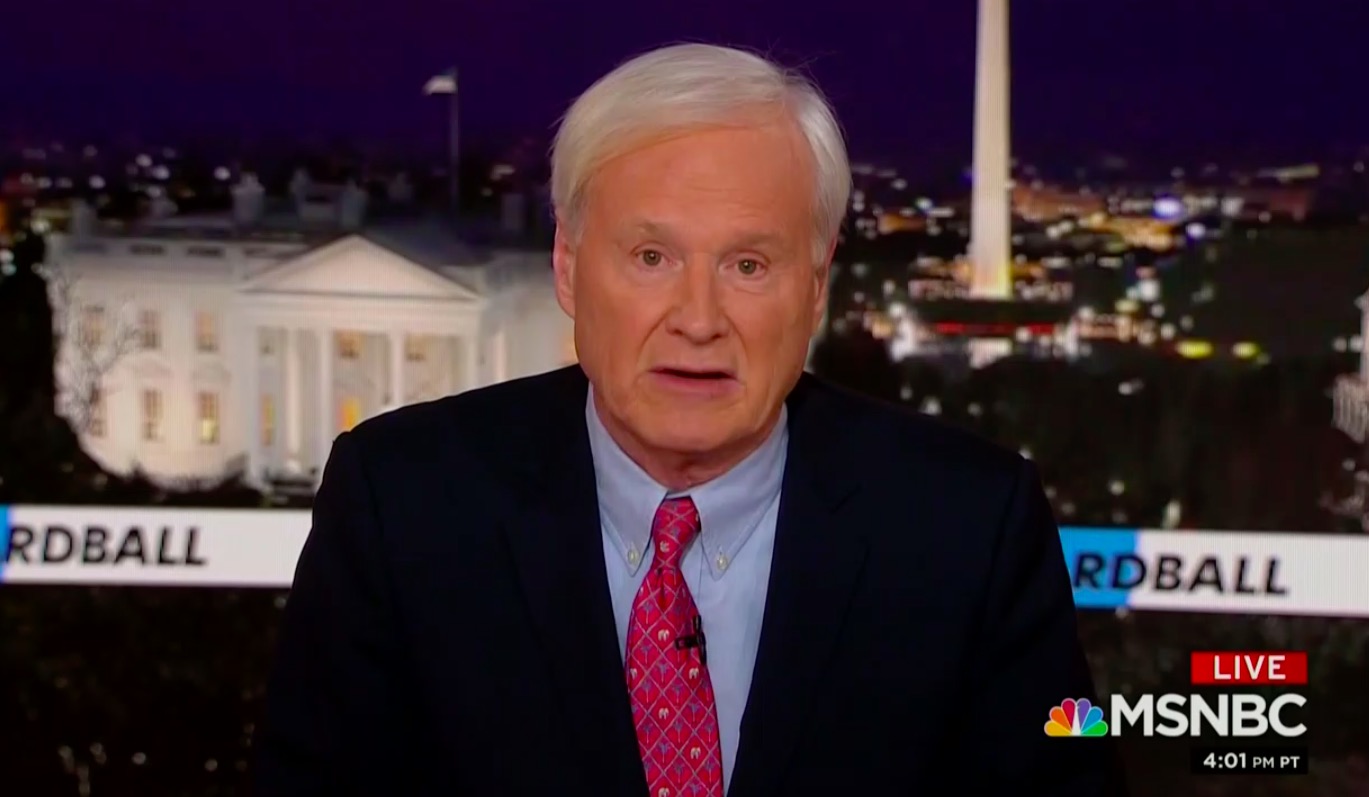 In light of Chris Matthews’ sudden retirement announcement from his longtime MSNBC’s program Hardball, Twitter responded with admiration and criticism for the host.

Matthews, who made an abrupt retirement announcement Monday night on the network stating, “After conversations with MSNBC, I decided tonight would be my last Hardball.”

MSNBC’s Steve Kornacki then took over the reins on the program and offered an emotional tribute to Matthews.

Laura Bassett, who accused Matthews of making sexist and “belittling” comments this past Friday, responded on Twitter Monday night to the retirement.

No, I have more to say than that. Since calling out Chris Matthews, this week has been really rough. The harassment has been invasive, cruel and personal. And it’s all worth it if he will never have the platform to demean and objectify us again. https://t.co/YS1FxW25zt

Anyway, who else needs a whiskey shot

Meanwhile, Matthews’ MSNBC colleagues praised and thanked him for his years at the network:

In shock. But let me say: being on @hardball was on my dream board from back in my @MiamiHerald column days. Chris Matthews not only let me on as a guest, he was 1 of the 1st to let me fill in. He has always been a genuine supporter & friend, who even sang for me when I was down. https://t.co/bwj5PK2TGs

Thank you @SteveKornacki for saying everything I was thinking ..
I am so sad about @HardballChris

Mika and I were deeply moved by @SteveKornacki’s tribute to Chris Matthews. Actually, we are wiping tears from our eyes. We love Chris and will miss him every night in our home at 7pm. As Steve said, Chris was the most human TV guy and “I say that as the highest compliment.” pic.twitter.com/M7uGj61kAB

Chris Matthews is a great colleague and an even better friend. I’m stunned. I wish him nothing but the best, and it’s hard to imagine “Hardball” without him. https://t.co/NjZWdOsKwc

Fox News’ Steve Hilton stated that retirement from Matthews was a “total f…ing outrage,” when higher-ups at NBC haven’t been held accountable yet:

what a total f…ing outrage

his sleazy misogynist bosses Noah Oppenheim and Andy Lack:
– covered up Harvey Weinstein’s crimes
– are apologists for rape and sexual assault
– yet KEEP their jobshttps://t.co/59B9unDHBa

This never goes well. The friend’s “He never did it to ME” vouch-for is meaningless, since the friend wasn’t always there, AND it discredits alleged victims. THIS one also manages to dismiss harassment as mere flirting, an idea that, like Matthews, has rightly been retired. https://t.co/iVoaPo74hP

It appears the woke commies got Chris Matthews pic.twitter.com/Kl72zrc5Bu

Chris Matthews resigned from MSNBC tonight. He is an honest, honorable, kind and compassionate human being and we wish him only the best in his career which is far from over.

I’m pretty upset about Chris Matthews leaving MSNBC. No more combing hair with shoes. No more coming in there all rumpled. No more weird stream of consciousness monologues. The world lost something today. A little happiness. A little joy. pic.twitter.com/dpt9mChHtJ

Beyond time. Credit to @ewarren for standing up to him and putting his on-air misogyny back in the spotlight, and MF-ing @LEBassett for speaking out about his backroom behavior -at great personal cost- and making this impossible to ignore: https://t.co/b6ShtXmJP1 https://t.co/tOPiAFWaam