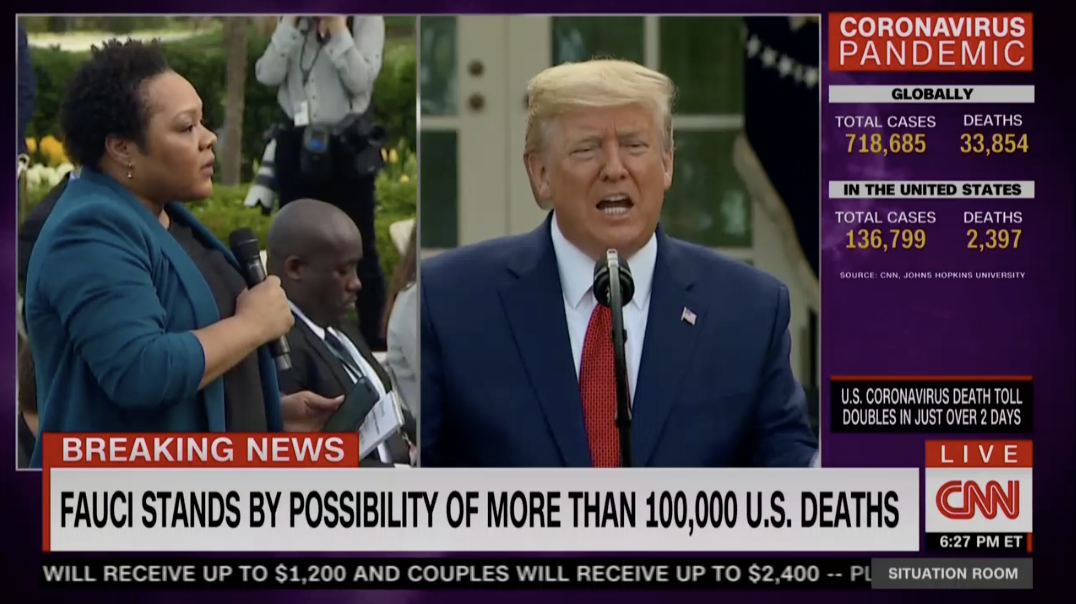 After a White House staffer pulled the microphone away from PBS White House correspondent Yamiche Alcindor and President Donald Trump declined to answer her questions — and berated her — at the coronavirus press conference Sunday evening, fellow reporters came to her defense on Twitter.

Media figures also saluted CNN reporter Jeremy Diamond for handing the microphone back over to Alcindor to complete her follow up question, which Trump then answered.

Before the microphone debacle, Trump berated Alcindor over her question, which angered the president and led him to falsely claim he never questioned whether governors need the equipment they requested to deal with the coronavirus.

“I think that a lot of things are being said that are more, I don’t think certain things will materialize, a lot of equipment is being asked for but I don’t think they’ll need.” Trump stated to Fox News’ Sean Hannity, further questioning whether governors needed as many ventilators as they were requesting.

When Alcindor asked Trump about those comments, he called her question “threatening” and refused to answer it.

Totally legitimate question from @Yamiche about what Trump said to Hannity about ventilators. Fair game.

Other reporters cheered Diamond and praised the PBS reporter’s courage to ask difficult questions at the presser.

Cheering for my friend @JDiamond1 who handed the microphone to @Yamiche !! This is how it’s done people. Proud to know them both ????

bravo to my @cnn colleague @JDiamond1 for, once called on, handing microphone to @yamiche so she could resume the questioning that Trump earlier cut off with his false and inappropriate tirade

The way it should work. Classy by @JDiamond1 to hand off to @Yamiche for her second question https://t.co/TKZ8yYNezU

?? @JDiamond1 for ceding his time back to @Yamiche.

Couldn’t be prouder of @Yamiche for refusing to be intimidated. This is real journalism. What’s sad is that she has to take this on a regular basis from this condescending asshole. https://t.co/l4jJtjnV8Z

I consider @Yamiche a role model for us all of us working in journalism, both in terms of her reporting and her decorum. No one deserves the treatment she receives from Donald Trump or his followers. https://t.co/N8StAVlLxG

If you want to see the combination of the courage and struggle of being a journalist who covers this White House, watch @Yamiche. She just.never.stops speaking truth to power

Speaking of @Yamiche, everyone should be watching the @NewsHour every Mon thru Fri. Consistently the best hour of TV news on air. And you get to see @Yamiche — plus @JudyWoodruff, @IAmAmnaNawaz, @LisaDNews, @nickschifrin, Jeffrey Brown etc — all the time, not just at pressers…

Alcindor responded to Trump teller her “be nice” and no “be threatening,” Sunday evening:

President Trump today at the White House said to me: “Be nice. Don’t be threatening.”

I’m not the first human being, woman, black person or journalist to be told that while doing a job.

My take: Be steady. Stay focused. Remember your purpose. And, always press forward.