Trump Snipes Back at Pentagon Officials Who Regretted Joining Church Photo Op: ‘They Should Be Proud to Walk Alongside of Their President’ 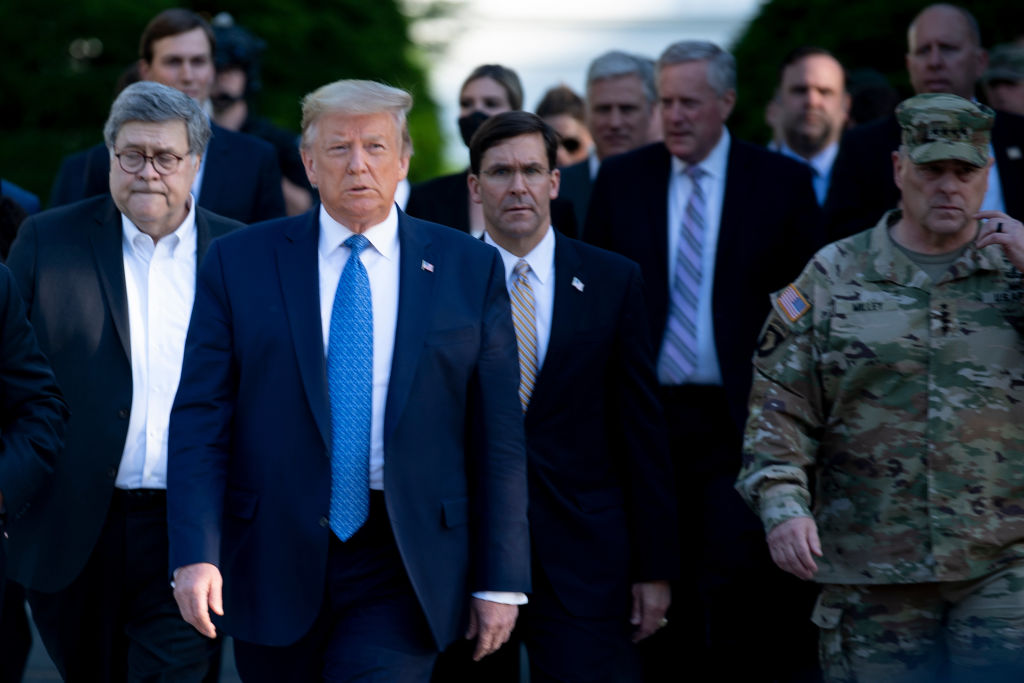 President Donald Trump is apparently not “fine” with the public regret two of his top Pentagon officials expressed over joining his infamous church photo op, telling Axios: “I think they should be proud to walk alongside of their president for purposes of safety.”

In a Friday interview with Jonathan Swan, Trump backtracked on his previous comments clearly irked about Defense Secretary Mark Esper and Chairman of the Joint Chiefs of Staff, General Mark Milley, where he seemed to shrug off their individual mea culpas about participating, saying “If that’s the way they feel, I think that’s fine.”

Both Esper and Milley — the latter in his Army Combat Uniform — had walked alongside Trump through a section of Washington, D.C. near the White House that had been violently cleared of protestors by federal law enforcement. When the heavily secured entourage arrived at St. John’s Church, Trump posed for some photos and held up someone else’s Bible. After Esper’s participation in the staged PR moment ignited outrage and a notable resignation, the Defense Secretary offered two different, dubious excuses, first claiming he “didn’t know where he was going” before changing to saying he was joining Trump to observe a burnt-out public restroom. Milley went further, and publicly apologized for his presence at was clearly a political stunt: “I should not have been there.”

Their public disloyalty clearly stuck in Trump’s craw, however, as he notably refused to say he still has full confidence in Esper during the Axios interview. Instead, Trump said “I personally think they should have done it differently,” of their public distancing of themselves from the White House optics staging. “I think they should be proud to walk alongside of their president for purposes of safety.”

“Under regulation, perhaps they’re right,” Trump said, before absurdly claiming that he was more knowledgeable about military rules prohibiting participation in politics. “I know the regulation even better than they do.”

“But they also would have been right to say, ‘We’re proud to walk alongside our president and we want our president to be safe,'” he added, implying that Esper and Milley were there as part of Trump’s security cordon, which they were not.