“The truth is, this is more a man’s issue than a woman’s issue. Yes, one out of three women will have an abortion in their lifetime ... we forget about the men so often in this story.” 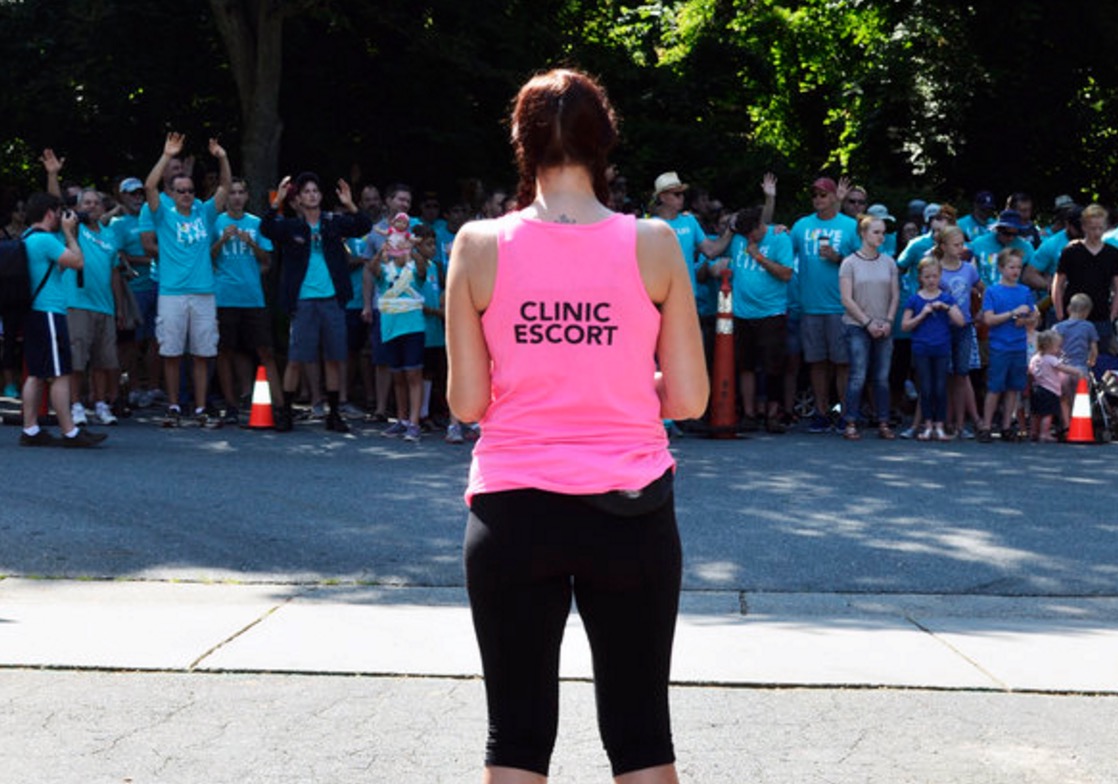 On Saturday, more than 600 protesters gathered outside an abortion clinic in Charlotte, North Carolina to tell women coming to access basic health care that abortion is actually a “man’s issue.”

Many of the protesters were affiliated with the group, “Men for Life,” whose founder Justin Reeder recently said in an advertisement, “The truth is, this is more a man’s issue than a woman’s issue. Yes, one out of three women will have an abortion in their lifetime, but it’s also one out of three men. We forget about the men so often in this story.”

“Men are called to be providers and protectors of women and children. We are calling for fathers to be fathers and take responsibility. If men were taking responsibility and standing with mothers then the majority of women would not feel like abortion is their only option.”

On the surface, such a sentiment — that abortion is “more a man’s issue than a woman’s issue” — is quite the head-scratcher. Even most opponents of abortion are able to at the very least regard it as a women’s issue. But with some context, it’s evident why Reeder and his hundreds of supporters have been led to believe what they do: These ideas are being fed to them by media and Republican politicians.

By media, I don’t even just mean traditionally right-of-center outlets like Fox News or LifeNews.com. According to a recent study by Media Matters, Fox News, CNN, and MSNBC are all guilty of giving the vast majority of speaking time about abortion to men. Throughout 2016, 60 percent of hosts, guests, and correspondents discussing reproductive rights on cable news were male. (No surprise, then, that 64 percent of comments about abortion on cable news were inaccurate.)

Whether or not this was the intention, in allowing men to dominate the dialogue around abortion rights, media is sending the message that this is an issue men should have more control and determinism in than women.

And from a legal standpoint, in Oklahoma, Arkansas, and other states passed bills requiring the consent of male partners for women to have abortions earlier this year. In Oklahoma, Republican state Rep. Justin Humphrey justified his bill to require written permission from the father of the fetus for women to be allowed to have an abortion, by stating in an interview with the Intercept: “I understand that they feel like that is their body. I feel like it is a separate — what I call them is, is you’re a ‘host.’”

His full response did not make things any better. From the Intercept:

“I believe one of the breakdowns in our society is that we have excluded the man out of all of these types of decisions,” he said. “I understand that they feel like that is their body,” he said of women. “I feel like it is a separate — what I call them is, is you’re a ‘host.’ And you know when you enter into a relationship you’re going to be that host and so, you know, if you pre-know that then take all precautions and don’t get pregnant,” he explained. “So that’s where I’m at. I’m like, hey, your body is your body and be responsible with it. But after you’re irresponsible then don’t claim, well, I can just go and do this with another body, when you’re the host and you invited that in.”

Humphrey somehow managed to brand men as the victims in the centuries-old abortion debate that has resulted in countless women being mauled, killed, and routinely dehumanized.

Considering the objective historical facts that 1) there were virtually zero female lawmakers throughout the early-mid 20th century, a time when abortion was illegal on a federal level and in most states, and 2) women couldn’t make any medical decisions with their doctors without their husbands’ consent through most of American history, and 3) ah, yes, that delightful photo of President Trump signing a bill restricting women’s reproductive rights while six male advisers stood behind him beaming — Humphrey’s claims had zero basis in truth.

But nonetheless, it’s laws and rhetoric like this that reduce women to the property of their male partners, and put women’s right to make choices about their bodies second to patriarchal traditions. With little to no scientific evidence to back up their claims, if men say a fetus is more worthy of human rights than an indisputably living woman, what’s to stop them from legislating away her rights?

With media giving men a disproportionately greater platform to speak on abortion and, more often than not, spew lies, and Republican lawmakers increasingly signing abortion rights over to men, male abortion opponents such as Reeder are being led to believe that this is their issue, that this is something they, not women, need to control. And you can bet that this sense that they’re justified in their quest to restrict and, ultimately, end access to safe legal abortion will yield all kinds of anti-abortion laws.

But of course, justified by a continued culture of misogyny, or not, this view is still objectively inaccurate.

Essentially all recent research indicates stigma, protests, harassment, and laws restricting abortion access have virtually no effect on abortion rates (hint to any anti-abortion lawmakers who may be reading this — access to contraception and accurate sexual health education, on the other hand, do successfully lower abortion rates). Restrictions may shame, burden, and yes, even endanger women, but whether through traveling great distances to have the procedure or even self-terminating, women will still exert control of their situations and have their abortions.

Still, despite this fact, sexist narratives by media and politicians persist.

Every day a cable news outlet allows a man to lead the discussion around abortion, and every day a Republican lawmaker proposes a bill to restrict a woman’s control over her body, another man is told that women’s bodies belong to him. And of course, this is ultimately the underlying message that calling abortion a “men’s issue” sends.