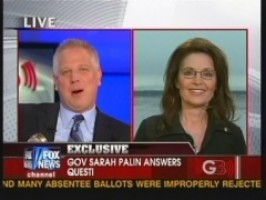 Obviously, unless sometime between now and 2012 there occurs a rip in the space-time continuum and the country slips into an alternate reality, Sarah Palin and Glenn Beck will not be running on a joint ticket for the presidency. But let’s speculate anyway.

The (sort of inevitable, considering their popularity) topic of a Palin/Beck 2012 was first broached in a Newsmax interview with Palin on Tuesday:

“I can envision a couple of different combinations, if ever I were to be in a position to really even seriously consider running for anything in the future, and I’m not there yet,” Palin tells Newsmax. “But Glenn Beck I have great respect for. He’s a hoot. He gets his message across in such a clever way. And he’s so bold — I have to respect that. He calls it like he sees it, and he’s very, very, very effective.”

For his part, Beck was a early Palin adopter, interviewing her on his HLN show in early 2008 long before she was on the national (or John McCain’s) radar. The Atlantic’s Marc Ambinder actually thinks this is an interesting idea that could double the Palin phenomena of 2008.

Palin/Beck could unite the conservative anti-Obama movement and basically form a Tea Party ticket that would vent the anti-stimulus, anti-Democratic health care reform, anti-cap-and-trade, sentiment that’s been brewing with a firestorm of angry, populist rallies.

Depending on which side of the political spectrum you fall, you might think this ticket, were it come to pass, was either actual proof that the Mayans were right and 2012 is the year of the apocalypse, or that you were somehow witnessing the political version of Super Friends. Either way, (and purely from the perspective of having to provide content, it would be sort of a dream) it is an utterly unlikely scenario.

Sarah Palin may be an enormously popular figure across the country, but with the publication of Going Rogue she has managed to alienate just about everyone in D.C. with the ability to run an effective campaign. Moreover, as a Newsweek article pointed out this week, populist candidates can make lots of waves, but they don’t make it to the White House. That’s not to say Palin is not a 2012 contender — it’s entirely possible she will run for political office again, but more likely as the running mate to someone whose experience might reasonably warrant the country’s votes.

As for Beck, not only has he never expressed any interest in political office, it’s very hard to imagine him leaving the comfort (and power) of his studio (and chalkboard) where he gets to make all the agitating assertions he wants with nary a dissenting voice to be heard. At some point as a politician you actually have to say what you are going to do, not just what everyone else but the Founding Fathers is doing wrong. Also, 2012 is still a ways a way.