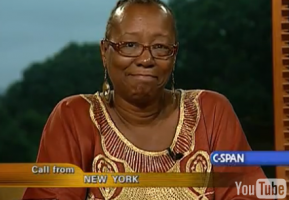 On C-Span’s Washington Journal this morning, ACORN CEO Bertha Lewis fielded a call from a viewer asking about the furor surrounding undercover videographer James O’Keefe‘s recent productions. While she reiterated that the actions of the fired ACORN employees were inexcusable, she went on to say that O’Keefe and his partner were thrown out of “dozens” of ACORN offices:

ACORN has maintained all along that O’Keefe has “doctored” the interviews, including one that contains a mock murder confession, and that the actions of the fired employees don’t represent the actions of 99% of their employees.

I contacted ACORN, O’Keefe, and Andrew Breitbart to try and get some more specific information about Lewis’ claim. Breitbart and O’Keefe are already on record saying that they weren’t turned away at any ACORN offices, a claim refuted by this police report.

Breitbart called me back, and we spoke for about 40 minutes. I asked him if James O’Keefe had been turned away at any ACORN offices, and if so, how many?

For the bulk of our call, he refused to answer the question, other than to say that Bertha Lewis is a liar. Finally, I got him to narrow the number of offices that turned James O’Keefe away to 23 or less by asking if he could confirm that her claim of multiple dozens of ACORN offices was false. “Laughably false,” he said, adding that she has “lied every step of the way.”

Why wouldn’t he specify whether, or how many, Acorn offices turned him away? “We’re not playing the mainstream media’s game here. They’ve already shown their true colors, that the goal was to try to destroy Hannah and James, and to take Bertha Lewis’ false statements at face value… Why is everybody playing the Howard Kurtz Sunday Reliable Sources game here, when the proof is in the effin’ pudding? The videos are the story, Hannah and James’ credibility isn’t at issue here, because they told you the truth every step of the way.”

Well, not exactly. The police complaint in Philadelphia appears to substantiate at least one ACORN office that turned O’Keefe away, and while not a lie, O’Keefe’s and Breitbart’s failure to check on Theresa Kaelke’s story certainly does have an impact on their credibility.

I haven’t seen evidence that the media has taken ACORN’s statements “at face value,” and it seems a curious bit of logic to refuse to refute a statement that he doesn’t want taken at face value.

While no-one disputes that the behavior in the videos is unacceptable, at issue here is the conclusion being drawn by the right that these actions are indicative of systemic corruption at ACORN. If O’Keefe went 5 for 6 at ACORN offices, that would at least support ACORN’s need to rethink its hiring and lower management. If, on the other hand, O’Keefe found 4 dupes out of 100 visits, this would support Bertha Lewis’ contention that these are the actions of outliers.

Unfortunately, ACORN wasn’t much more helpful than Breitbart. After several hours of follow-up, their spokesman dumped this email on me minutes before closing time:

From: Tommy Christopher: Bertha Lewis was on C-Span this morning and said that James O’Keefe was turned away from dozens of ACORN offices. Do you have a more exact estimate/any sort of documentation of this? Internal logs/reports?

I have attached the police report from Mr. O’Keefe’s visit to the Philadelphia ACORN office. This is one of the several offices that he was turned away from. Also, Mr. O’Keefe has said on many occasions that he spent a total of $1,300 on this project but has failed to produce or post any of the receipts confirming this number and we would like to contact his travel agent.

So, they narrowed it down from “dozens” to “several.”

Without access to all of the facts, it is difficult to measure the impact or the meaning of this story, which seems to suit both sides just fine.