Allen West Is Really Concerned About Mosques Existing in America

Allen West Is Really Concerned About Mosques Existing in America

Shocker: more mosques exist in the more populous American states. Another shocker: that fact is very troubling to Allen West.

In a blog post entitled “US centers of Islamic activity form interesting map,” the former Republican congressman posted two maps, including this one: 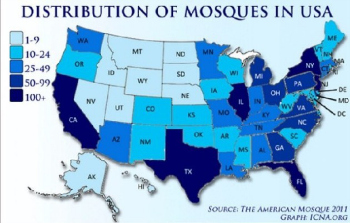 He also included a map, based on “investigations,” that lists the various terrorist network cells reportedly found in major American cities, including New York, Los Angeles, and Houston. This is seemingly meant to connect the two maps together.

With that in mind, West asked: “I do have a question for all you folks out there with a ‘Coexist’ bumper sticker on your Prius: how many churces [sic] and synagogues are in Saudi Arabia?”

That should be a point of pride for us, right? We are a much more tolerant, free, and prosperous nation that believes in freedom of association and religion. And thus we have more mosques than Saudi Arabia has synagogues or churches.

“When tolerance becomes a one way street, it leads to cultural suicide,” he concluded.

Oh, okay. We need to be more like Saudi Arabia then. Except towards Muslims. Got it.

Despite West’s demagoguery, the story of the Muslim-American is actually a success story. Unlike in Europe, we don’t have Muslim-specific ghettos, active separatist movements, and violent riots. The former congressman may consider the arrests of alleged Islamic American terrorist cells to be a sign of an impending jihad, but he (and others) neglect that such outliers are naturally going to exist in such a populous group.

Washington Post columnist Radley Balko once summed up for Reason the exact nature of the Muslim-American success story:

In contrast to many of the minority Muslim populations in Europe, American Muslims embrace modernity, are better educated, and earn more money than their non-Muslim fellow citizens. A 2007 Pew poll suggests American Muslims are also doing just fine when it comes to assimilating and viewing themselves as part of America. According to the poll, just 5 percent of American Muslims express any level of support for Al Qaeda, and strong majorities condemn suicide attacks for any reason (80+ percent), and have a generally positive image of America and its promise for Muslims.

But good luck trying to have that rational discussion with West.