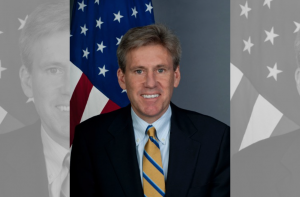 In a new interview with The New Yorker, the sister of slain Ambassador Chris Stevens — one of the four American casualties from the September 11, 2012 attack on a compound in Benghazi, Libya — says that the fault does not lie with former Secretary of State Hillary Clinton.

On the same day that the Republican-led Select Committee released its blistering 800-page report about the failures of the State Department in the attack (though found no new culpability to lay at Clinton’s feet), Dr. Anne Stevens spoke candidly about the circumstances surrounding her brother’s death. Stevens, who is the chief of pediatric rheumatology at Seattle Children’s Hospital, serves as the official spokesperson for her family. The New Yorker‘s Robin Wright asked, “Whom do you fault for the lack of security that resulted in the death of your brother, in Benghazi?”.

It is clear, in hindsight, that the facility was not sufficiently protected by the State Department and the Defense Department. But what was the underlying cause? Perhaps if Congress had provided a budget to increase security for all missions around the world, then some of the requests for more security in Libya would have been granted. Certainly the State Department is underbudgeted.

I do not blame Hillary Clinton or [former CIA Director] Leon Panetta. They were balancing security efforts at embassies and missions around the world. And their staffs were doing their best to provide what they could with the resources they had. The Benghazi Mission was understaffed. We know that now. But, again, Chris knew that. It wasn’t a secret to him. He decided to take the risk to go there. It is not something they did to him. It is something he took on himself.

Dr. Stevens noted in the interview that her brother, who was serving as the U.S. Ambassador to Libya at the time of the attack, had been “fascinated” by the Middle East since he was a child, even dressing up as Lawrence of Arabia, “with a towel and a pot atop his head.”

She admitted further that neither of the Select Committee reports released this week (the Democrats published a shorter version of their investigation Monday) offered any new, previously-unknown information.

But ultimately, the hardest hitting element from the interview with Dr. Stevens is that despite the politicizing of her brother’s death (“Every report I read that mentions him specifically has a political bent, an accusatory bent,”), she does not find culpability with Hillary Clinton personally. “She has taken full responsibility, being head of the State Department, for what occurred. She took measures to respond to the review board’s recommendations. She established programs for a better security system. But it is never going to be perfect,” she admitted to The New Yorker. “I don’t see any usefulness in continuing to criticize her. It is very unjust.”

When prompted to reveal what she thinks her late brother would have thought about the 2016 election, Dr. Stevens briefly offered, “I know he had a lot of respect for Secretary Clinton. He admired her ability to intensely read the issues and understand the whole picture.”

Click here for the full interview at The New Yorker.