Analysis: If Karl Rove Were Chicago Mayor, Would Coverage of Scandal Be Remotely the Same?
Opinion

Analysis: If Karl Rove Were Chicago Mayor, Would Coverage of Scandal Be Remotely the Same? 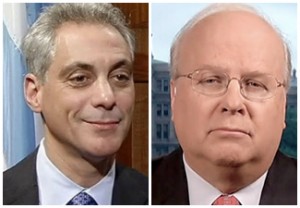 Sometimes the best way to make a point is to paint a picture in a parallel universe. When doing so, the Bon Jovi/Wanted Dead or Alive rule is simple: It’s all the same… only the names will change.

Today’s trip to said universe involves former President George W. Bush and his senior adviser during most of his tenure at 1600, Karl Rove. Here’s how the parallel story goes: After dutifully working with the president for two years and making some enemies inside the Beltway and in the media for being too cold, too divisive, Rove leaves President Bush’s side to run for mayor of Dallas. He seemingly has everything on his side: He’s a Republican in Texas, has plenty of money behind him, and his competition for the office is relatively weak. The stars are obviously aligned nicely and Rove wins easily.

But the man formerly known as The Architect (for being the brains behind 43’s strategy in winning two national elections) quickly learns that advising and orchestrating politics behind the scenes is a bit less challenging than actually governing. Unable to gain any true traction on major initiatives while crime continues to be out of control, Rove’s approval numbers go down quickly. And despite having built-in incumbent and state party advantages, he’s in danger of losing re-election.

Meanwhile, one night on the streets of Dallas, a black teenager is shot 16 times and killed by a white police officer while not posing any immediate threat to him or other officers nearby (the teen was holding a knife, yes, but was also veering off in a direction away from officers at the time he was shot, which included the officer firing many times after he was already on the ground). The whole thing is caught clearly on dash-cam video. But for some reason, the tape doesn’t go public until well after Rove overcomes other challenges and wins re-election in a humbling runoff. And it’s not like Rove decided to voluntarily release it. Instead, it took a Freedom of Information Act request to force a judge to do so over one year after the incident.

“It is graphic. It is violent. It is chilling. This video will tear at the hearts of all , Dallas residents,” says the Texas State Attorney.

Even Rove’s friends are forced to concede how bad this not only looks, but is: “Why did it take a year to indict a DPD officer who shot a kid 16 times? Would it have happened today if judge hadn’t ordered video release?” asked former Bushie Andy Card.

All the while, George W. Bush avoids speaking about the issue and tries to stay silent, but ultimately can’t. It’s the lead on almost every national newscast and frontpage news across the country. Reporters hound him everywhere about it. Trump doesn’t get a breath for publicly standing by him either. It’s Chris Christie and Bridgegate all over again, but even worse. And under a siege of media righteousness, Rove rightly resigns, citing the good of the city and integrity of the office, blah, blah, blah…

As we safely exit this parallel universe and come back to reality, ask yourself this: Would the Rahm Emanuel scandal in Chicago be covered differently if Karl Rove sat in his chair instead? After all, Emanuel had President Obama’s ear probably more than anyone leading up to his election and during the first few years of his presidency as White House Chief of Staff, just as Rove was arguably more trusted than anyone in 43’s inner-circle as campaign head and senior adviser.

The Emanuel story is being somewhat covered, yes, but isn’t remotely an A block/lead story (which always defaults to Trump). And the part of the Emanuel story that is covered focuses more on the protests than the elephant narrative in the room: A white mayor of the country’s second (correction: third) largest city — who was/still is very close to the president — being at the center of a cover-up of a white cop murdering a black teen caught on camera. The tape is suppressed while a mayoral election is happening and isn’t released until 15 months later after the mayor is safely re-elected. And his party’s frontrunner in the form of Hillary Clinton has voiced support for him, thumbing her nose at the black community and the victim’s family in the process. If Trump had done the same for Rove (hypothetically speaking, of course… Trump loathes anyone connected to the Bushes), the howls would be at the usual volume of 11.

Coverage exists but doesn’t remotely dominate the way Ferguson and Baltimore did. Nobody is calling Rahm Emanuel a racist the way they would if another senior strategist to another president were in his place…

The anger and piousness is sorely lacking from the pundits paid to provide it.

And if you believe that if we’re talking Rove instead of Rahm here that the coverage wouldn’t be dwarfing every other story out there, you’re living in a parallel universe.