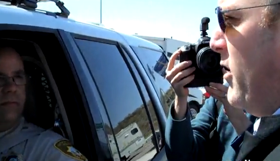 The last time Andrew Breitbart went to a large Tea Party-related event populated by liberals… well, the video speaks for itself. This time around, he got caught in the crossfire of an anti-Tea Party egg-throwing escapade– and was almost arrested after being accused of attacking Tea Partiers himself.

In the first video that made its way to YouTube, the policeman appears to first not recognize Breitbart, who explains that he was surprised with the pro-Harry Reid crowd forming around the area where Tea Party members were expected to congregate for an event. Breitbart explains he did not throw eggs at a Tea Party bus– a strange claim without context– and tells the officer he was threatened by the crowd. Since the video made it impossible to understand why Breitbart was explaining that he didn’t attack Tea Party members, Mediaite asked Breitbart directly yesterday to explain the precursor to this video, and whether to expect further clarification– and video evidence– in the future (the short answer? It’s Breitbart, of course there’s video).

It’s a pretty remarkable story. Breitbart claims that, upon arriving in the area, he found an individual who identified himself as a pro-Reid union member directing Tea Party participants in the opposite direction of the Searchlight event, along with a “group of people who were agitating and egging on literally the procession of cars coming into Searchlight.” When confronted about what he was doing there, the man responded nonchalantly, “I’m misdirecting traffic.” (Apparently, this is becoming a trend.)

Upon seeing the cameras and noticing Breitbart’s interaction with the chief traffic misdirector, the crowd, he notes, became agitated, and as a bus full of Tea Party members passed by, what he described as “a barrage of eggs was hurled. The crowd went from about a 2 to a 7 or 8 in terms of volatility,” he notes after the eggs were thrown. One man told him that if he didn’t leave the (supposedly Tea Party friendly) area, “I’m going to jail tonight.” The anti-Tea Party crowd then called the police and claimed Breitbart had thrown the eggs at the bus. In the hours since we spoke to him, Breitbart released the following video of the scene on Big Government (he also released an interview with the bus driver this morning):


The incident, meanwhile, fits perfectly into Breitbart’s “false narrative” media theory: the extreme left-wing media has such control over information that “they know they can get away with things in daylight,” including highly-infantile use of edible projectiles. And, worse, they have control of the government, too. “What I find very suspicious was that the police were happy to investigate me,” he said, but when he told them he had video evidence of the crowd’s guilt, “the police had zero interest in going into that crowd.”

Breitbart promised an avalanche of video footage to back up his claims, including the above clip, to be released sometime this week. Below is the original video released yesterday courtesy of Ryan P. Dixon: