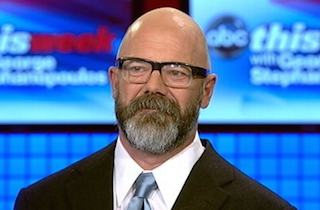 When Brendan Eich was forced out as CEO of Mozilla earlier this month for making a donation to the anti-gay marriage Proposition 8 campaign, writer Andrew Sullivan became perhaps his most unlikely defender. Sullivan, who is gay, worried that the LGBT movement was starting to resemble the “fanaticism” of the religious right. Naturally, Sullivan also had some thoughts on Donald Sterling, the L.A. Clippers owner, who was just banned for life from the NBA for making racist remarks on tape.

On Tuesday, Sullivan shared those views by answering a reader question about how and why the Sterling situation differs from that of Eich. He began by agreeing that in a free country it is always “permissible” for a private organization to sanction its owner, as was now done in both cases. But on the question of whether those sanctions are “justified,” Sullivan saw a difference between the two.

“I think it’s obviously appropriate in the Sterling case – because the remarks are horrifyingly racist. If Brendan Eich had made comments telling his friends to keep away from faggots, if he’d used any such terminology or had ever been shown to have discriminated against gays in the workplace or in his daily interactions, then his case would be very similar. But no such comments are in the public or private record, and there’s zero evidence that he ever acted in the workplace to harm gay employees.”

To critics who say Eich did hurt the gay community by supporting Prop 8, Sullivan said that even if that were the case, it was his motivation that matters. “Such acts can be driven by bigotry, sure, but also by general discomfort with sudden social change, religious conviction, misunderstandings, personal experiences, worries about unintended consequences, and the like,” he wrote. “And you cannot know that Eich was motivated by rank Sterling-level bigotry – in fact, we have plenty of evidence that he wasn’t and isn’t.”

Despite the fact that Eich was against full marriage benefits for gays and lesbians, Sullivan was not prepared to label him a “bigot” of Sterling’s variety. “I think the term ‘bigot’ should be reserved for those like Sterling who have demonstrated it without a shadow of a doubt,” he concluded.