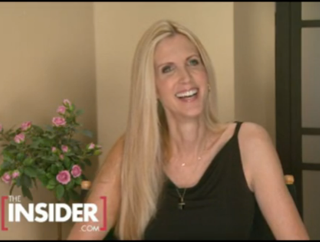 The periodic fascination in the Americas with British royalty jars quite a few who stick strongly to America’s past as a nation founded in opposition to monarchy. Ann Coulter isn’t alone in think that it’s a bit weird when New York cabs have pictures of the Duke and Duchess of Cambridge on them. What she may have more trouble getting people to rally around, however, is the idea that Princess Diana was an “anorexic, bulimic narcissist.”

Speaking to The Insider‘s Kevin Frazier about her new book, Demonic, the conversation took a detour when Frazier asked Coulter to discuss why she considered Americas fascination for royalty bizarre. “I find it a little baffling when Americans get so gaga-eyed over a princess,” she explained, “and particularly Lady Di who was this anorexic, bulimic narcissist.” She doesn’t elaborate from there, but you get the point.

The conversation continues from there, as Coulter explains the biblical beginning of her book (and the name Demonic) and goes to bat for Sarah Palin, who she argues gets a bad deal because “it’s just assumed Sarah Palin is an idiot, so anything she says is a mistake.” And, no, Coulter still doesn’t want Palin to run for president– “running for President would not be a fun job.” She does cap off the interview with a bit of a nod to the beginning of it, however, admitting that she does sometimes say things to anger a liberal audience. “I definitely know how to rile up liberals,” she noted, “It’s almost a gift.”

The video via The Insider below: