Any Damn Volunteer Can Drive in the Presidential Motorcade 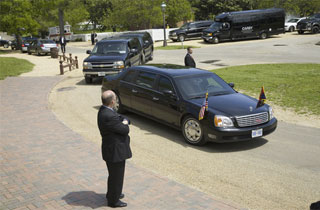 According to an article likely written by one very cheesed off New York Times reporter, it doesn’t take much experience to drive a car in the presidential motorcade — in fact, all people need to do is answer two questions. One: do you have a clean driving record and no criminal history? And two: will you do it for free?

In fact, many of the vans driven in the official White House motorcade — specifically, the ones used to ferry low-level staffers and the journalists covering the president — are driven by unpaid volunteers, many of whom got their position by knowing somebody at the White House, or having worked on a campaign.

But [24-year-old volunteer Natalie] Tyson said in a telephone interview several weeks after she drove in the motorcade that she had received little instruction from the Secret Service about what to do in the event of a high-speed emergency. She assumed that she should just follow the car in front of her no matter what happened.

Needless to say, outside experts and former Secret Service agents are not pleased with this arrangement, especially given the past year’s scandals in the Service. “If the motorcade ever comes under fire, it’s going to be a problem,” former agent Dan Emmett told the Times. “There are so many non-law-enforcement vehicles that it’s going to be a goat rope. Everyone will be responding, police officers and the Secret Service, and it will be all these people running around in a panic like the last scene of the ‘Blues Brothers’ movie, when there’s the big police chase that ends in a wreck of 50 police cars.”

(And yes, the reporter who wrote this seems pretty cheesed off, if this sentence indicates anything: “Their cargo of lowly staff members and reporters is apparently less precious.”)