Are Some Democrats Trying to Quit the Koch Habit? 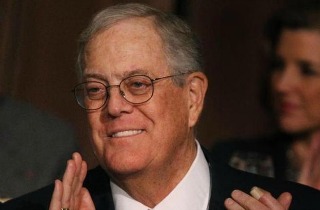 They have been smeared on the floor of the United States Senate, accused by the Senate Majority Leader of facilitating Russia’s invasion of Ukraine, and accused by prominent Democratic political strategists of seeking to “destroy the earth.” General Zod has nothing on the libertarian entrepreneurs and philanthropists, Charles and David Koch.

“Democrats want to make the billionaire Koch brothers their 2014 version of Mitt Romney,” observed POLITICO’s Burgess Everett. That is, a figure they can mold into the caricature of an inaccessible and aloof plutocrat who is more consumed with the acquisition of power for himself and his allies than the welfare of average Americans.

This cynical tactic worked for Democrats in 2012. President Barack Obama and his party deftly avoided having to run on the president’s signature first term accomplishment, the persistently unpopular Affordable Care Act, and the moribund economy. Instead, they were able to focus on accusing their Republican opponents of waging a variety of wars on women, African-Americans, Hispanics, young people, and any other group which traditionally votes Democratic.

The Kochs, who are notoriously allergic to the media spotlight and are largely invisible to the public, serve as a powerful foil for Democrats -– their very unwillingness to speak in their own defense ensures that they are easily demonized. But the ham-handed approach the Democratic Party has taken in the scattershot effort to animate their base voters ahead of November has its critics.

In North Carolina, where one of the 2014 election cycle’s most embattled Democratic incumbents faces an uphill battle in her bid for reelection, one veteran Democratic strategist is sounding alarm bells. The Democratic campaign against two private citizens who will not be on the ballot in on Election Day, this strategist submitted, is deeply misguided.

“Most voters don’t think about elections the same way political professionals or junkies do. They don’t see a great battle of ideas and ideologies playing out,” wrote Democratic political consultant Thomas Mills. “They don’t know the Popes or the Kochs or the Soros or the Brocks of the world.” He continued:

The Democrats have taken a defensive posture with a reactive response. In essence, they’ve ceded the political agenda to the Koch Brothers and the Republicans. They should be attacking GOP policies and candidates, not GOP funders.

Some data supports Mills’ conclusion. A George Washington University Battleground poll released on Tuesday shows that a majority of the public has “never heard” of the two siblings. Of the 48 percent of the public who has heard of the Kochs, 11 percent expressed no opinion about their activities and 12 percent said that their opinion of the brothers was a positive one. After months of concerted effort, only 25 percent of respondents had a negative impression of the two brothers – a figure which likely corresponds closely to the number of core Democratic partisan voters who turn out in every election.

Few Democratic consultants, and zero Democratic elected officials, are willing to come out publicly against the central pillar of their party’s midterm election strategy and the pronouncements of their party’s powerful leader in the upper chamber of Congress. But the coalmine’s canaries are singing loudly today, and more are certain to follow.

Expect more to warn that the Democratic Party’s base mobilization strategy needs to consist of more than merely demonization of two Republican donors.