Attacking Bernie Sanders Over His Visit With The Pope Is Garbage 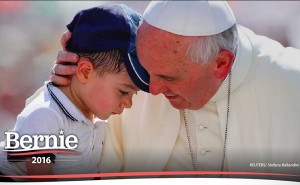 Independent Vermont Senator and Democratic presidential candidate Bernie Sanders had a big weekend, jetting off to the Vatican to deliver a speech at a conference there, and even getting to meet Pope Francis himself, and to hear Sanders’ opponents tell it, this makes him history’s greatest monster. According to online critics, Sanders flew to Rome on the Marie Antionette Express, murdered the environment, crashed the Vatican like some drunken neighbor peeing in your barbecue pit, stalked the Pope, and claimed he was now an honorary Pope, too.

I’m only exaggerating slightly, and as a public service to all you Bernie-haters on Twitter, I’m going to explain why this is all garbage before you make yourselves look stupid.

First of all, Bernie is taking a lot of heat for supposedly jetting off to Rome on a “private jet” that cost “up to $200,000,” and had fancy menus with lobster sliders on them, all on his $27-buck-apiece supporters’ dime. The genesis of this garbage is a combination of this Daily Mail story and this tweet from Sanders beat reporter Yamiche Alcindor:

.@BernieSanders is about to take off for NY. We’ve been served a menu for the 9 hour chartered flight he’s taking pic.twitter.com/1nR15R3aQQ

The facts are that Bernie didn’t take a private jet, he chartered a commercial jet, the cost of which is unknown, but which would be shared by the news organizations covering Sanders, and wow, he’s got letterhead! And an inkjet printer!  The fact is he had no choice but to use a private charter flight in order to accommodate his staff, the traveling press, and the Secret Service. Aside from the fact that this attack, along with the tabulating of fuel consumed, puts you in the same intellectual space as PJ Media, or Fox News the time they complained about President Obama‘s “$200,000,000 trip to India,” it’s just ignorant of the way politicians travel. The dude’s running for a job that comes with several private jets.

Then, there’s the idea that Bernie totally exaggerated his meeting with the Pope into some kind of big honking deal, when all he really did was “stalk” the Pope on his way out of the residence. Here’s what Bernie said:

“It was a real honor for my wife and I to spend some time with him,” the senator told The Associated Press on Saturday morning during an interview at a hotel rooftop overlooking St. Peter’s Square. “He is one of the extraordinary figures not only in the world today but in modern world history.”

The meeting occurred at Domus Santa Marta, the pope’s residence. The senator and his wife, Jane, were overnight guests there after attending a conference on Friday at the Vatican on economic inequality and climate change.

“I told him that I was incredibly appreciative of the incredible role that he is playing in this planet in discussing issues about the need for an economy based on morality, not greed,” Sanders told AP.

The meeting occurred before the pontiff departed for a trip to Greece to highlight the refugee crisis.

And here’s what the Pope said:

Pope Francis said his brief encounter Saturday with U.S. presidential candidate Bernie Sanders was a sign of good manners, “nothing more,” and hardly evidence of interfering in American politics.

…”This morning when I left, Sen. Sanders was there. … He knew I was leaving at that time and I had the kindness to greet him and his wife and another couple who were with them,” the pope told reporters traveling back with him to the Vatican.

“When I came down, I greeted them, shook their hands and nothing more. This is good manners. It’s called good manners and not getting mixed up in politics. If anyone thinks that greeting someone means getting involved in politics, they should see a psychiatrist,” the pope said.

Jeffrey Sachs, a Sanders foreign policy adviser, said there were no photographs taken of the pope and Sanders together. Sanders’ spokesman, Michael Briggs, said Francis was “100 percent correct that this was not a political meeting,” thanking the pope’s staff making the arrangements. He said Sanders and his wife “were advised the night before to be ready to meet the pope at 6 a.m.”

Am I missing something? There’s not a whole lot of Rashomon there. It sounds like Bernie Sanders did what anyone in the world who had a chance to meet the Pope would do, and the Pope treated Bernie about the same as he treated Kim Davis.

Finally, there’s the notion that Sanders is implying that the Pope endorsed him, aided by this tweet from Time reporter Zeke Miller:

Bernie walking a fine line on sort of claiming the endorsement of the Pope https://t.co/XGeLMcUMog pic.twitter.com/CsVTmkFTZV

With all due respect to Zeke Miller, no he freaking isn’t. I can’t imagine anyone who knows how to pronounce the word “endorsement” seeing that picture and saying, “Wow, it looks like the Pope endorsed Bernie Sanders!” I guess Hillary is also claiming an endorsement from Justice Ruth Bader Ginsburg.

Giving a speech at the Vatican on income inequality is a nice thing, and meeting the Pope and getting excited about it is also a nice thing. Even politicians you don’t like can do nice things.