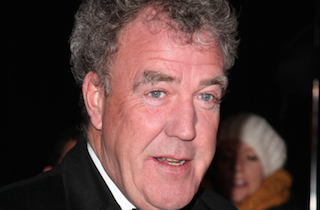 Jeremy Clarkson, one of the hosts of the popular BBC show Top Gear, has been booted out. The BBC decided not to renew his contract after reports Clarkson got into a physical altercation with a staffer.

There were reports earlier this month that Clarkson got into a “fracas” with producer Oisin Tymon over steak. Clarkson reportedly tried to order steak from a restaurant and was informed the chef had already left. Clarkson wasn’t happy about this, and argued with Tymon. There was some pushing and Clarkson allegedly hit Tymon.

The BBC consequently suspended Clarkson, who got an outpouring of support Clarkson got on Twitter. Even Prime Minister David Cameron expressed hope that the whole thing could be sorted out.

Video emerged a few days ago of Clarkson going on a profanity-laced tirade against the BBC. Today, the BBC officially sacked Clarkson.

In a lengthy statement, BBC director general Tony Hall said, “It is with great regret that I have told Jeremy Clarkson today that the BBC will not be renewing his contract. It is not a decision I have taken lightly.” But he lays out exactly why action had to be taken:

A member of staff – who is a completely innocent party – took himself to Accident and Emergency after a physical altercation accompanied by sustained and prolonged verbal abuse of an extreme nature. For me a line has been crossed. There cannot be one rule for one and one rule for another dictated by either rank, or public relations and commercial considerations.

Clarkson’s co-hosts, James May and Richard Hammond, still have contracts with the show. Sky News caught up with May, who didn’t say too much about the situation, only expressing his displeasure with Clarkson’s sacking and saying despite being a “knob,” he actually liked working with him.

There was a report a few days ago that May and Hammond refused to return to Top Gear without Clarkson. It’s unknown at this point whether they will remain with the show.

You can watch May’s brief comments here, via Sky News: