Ben Jealous Needs to Stop Lying About Hillary and ‘Superpredators’ 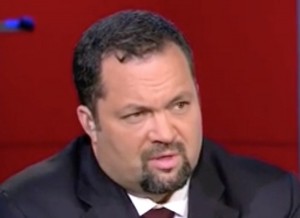 The upcoming South Carolina Democratic primary means that Bernie Sanders and Hillary Clinton are locked in a battle of Dueling Black Endorsements, and one of Sanders’ most prominent endorsers this week has been well-respected former NAACP head Ben Jealous. There are a lot of fair cases to be made in either direction about these candidates, but Jealous has been hitting the airwaves with an argument that centers around a very dishonest attack.

In television appearance after television appearance, Jealous has made comparisons between Bernie Sanders’ record and Hillary Clinton’s that vary in their degree of persuasiveness, but every time, he has prominently featured the claim that Hillary “pushed the ‘Superpredator’ Theory”:

Pushing the Superpredator theory. a theory that said a child as early as age 6 months could be a sociopath beyond redemption, and was never used to explain the actions of the white young men who shot up Columbine, but always used against urban black men caught up in drug wars and street crime and used that to push for mass incarceration.

If you don’t know what the “Superpredator” theory was, The New York Times did a bang-up recap a few years ago, but it was essentially a junk-science criminology theory that foretold a cataclysmic wave of child sociopaths, and while Jealous is correct that there was a strong racial component to the narrative, his claim that it was “never used to explain the actions of the white young men who shot up Columbine” is belied by the fact that an entire chapter of the book “Superpredators” is devoted to that very crime.

But fair enough, it was a racially-loaded theory (later debunked and withdrawn by its principal author) that was pushed hardest by right-wingers, and the quote that’s been circulating isn’t exactly a good look for Hillary. “They are not just gangs of kids anymore,” the quote goes. “They are often the kinds of kids that are called ‘super-predators.’ No conscience, no empathy. We can talk about why they ended up that way, but first we have to bring them to heel.”

This is the evidence upon which Ben Jealous bases his claim that Hillary was “pushing” the Superpredator theory, which is pretty thin even on its face. She referenced it once, twenty years ago. If you look at the context of that quote, however, it becomes clear that Hillary wasn’t iising the term as a broad slur against young black youths, but as a specific reference to those involved in gang murders, and she wasn’t using it to advocate for mass incarceration, she was promoting something called “community policing”:

As you can see, Hillary wasn’t “pushing” anything, unless making a reference to something once, at a speech in which that thing is part of the fourth thing on a list of five things. Was her word choice poor? In hindsight, yes, but it’s funny how time heals things for Ben Jealous when it comes to Bernie Sanders, who voted for the same crime bill that Berniacs deride Hillary over, even though she did not have a vote on it:

Maddow: But Bernie Sanders on his website until recently bragged about the fact he was a supporter of the crime bill in the ’90s.

Maddow: It’s not like he’s been an unwavering champion on this issue. He shifted on this issue from the same position she was in.

Maddow: And was still campaigning on it recently.

Jealous: But let’s be really clear, you have to recall in the 1990s most CBC members supported the 100 times disparity. everybody lost their mind, there was so much urban violence, right?

Right, maybe even enough to blurt out a crapulous buzzword while outlining policies that she had nothing to do with, let alone voted on. Even when she was promoting the crime bill as first lady, Hillary took care to note the positive aspects, and clearly seemed to view the stentorian aspects as a tradeoff:

None of this is to say that there aren’t valid arguments on both sides. Jealous points to Bernie Sanders’ racial justice platform, but Hillary was much earlier and much more aggressive with hers. On the other hand, Hillary has a lot to answer for with black voters, particularly with regard to how she campaigned against Barack Obama in 2008, but also for her role in the bad bargain that Democrats have offered black voters for years. The issue of trust with black voters and other Obama coalition voters is a real one.

Sanders has had his own issues with that coalition, but has carefully timed the rollout of his key endorsements to mitigate that. These are all fair things to consider. The lie that Hillary Clinton “pushed the Superpredator theory” is not, and Ben Jealous ought to stop saying that.