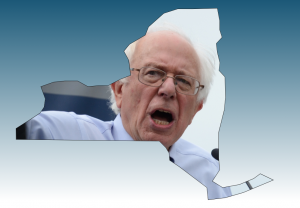 Before the state-wide primary in Michigan on Tuesday March 8, Vermont Senator Bernie Sanders and his underdog scrappy campaign were truly painted as the underdogs in the fight against Goliath, and most pollsters didn’t even think to give the Democratic-Socialist a slingshot of his own in the battle. The last available Real Clear Politics data leading up to the primary indicated that former Secretary of State Hillary Clinton was likely to defeat her competitor with a 21.4 point spread to spare. The projections from the systematic FiveThirtyEight indicated that Clinton had a 99% chance of winning the Great Lake State, based on, “state polls, national polls and endorsements.”

As political history and even more trumped up political theater will remember, Sanders shocked the world of sorts, pulling off what has been deemed by far-too-many media outlets as the Michigan Miracle. Sanders took home 595,222 votes compared to Clinton’s 576,795, enough to “win” the state with 67 delegates.

And today, on the eve of the biggest single state primary convention in the 2016 cycle, Sanders is hoping to replicate his David over Goliath success in the place that both he and Clinton call home. The stage is certainly set for Upset 2.0; the newest Real Clear Politics polling indicates a substantive double-digit lead for Clinton yet again:

And even FiveThirtyEight has weighed in with its projection forecast for Tuesday’s showing in the Empire State, and — surprise, surprise — Hillary Clinton is once again expected to take home the win with a 99% chance of winning. In fact, in all 20 polls that FiveThirtyEight collected for its quantitative reveal, the former New York state Senator Clinton has a double-digit lead over Sanders in New York in all but one.

And if the turn-them-away-at-the-door sized crowds that came out for Sanders in Michigan were impressive, just take a look at how well the Brooklyn-born pol has been faring in recent rallies in the Big Apple: 18,500 in the South Bronx, 27,000 in Washington Square Park, and 28,000 in Prospect Park on Sunday — just miles from the hip downtown Brooklyn locale that the Clinton camp has established as its headquarters.

The ticker-tape from the Michigan Miracle celebration has long been swept up, and for the last several weeks the attention from the election world has been locked firmly on New York and Sanders’ decreasing odds of defeating the delegate deficit. Even in the next several key states on the political calendar — states like Maryland, New Jersey, Indiana, and California — Clinton maintains an expected comfy lead over Sanders. The writing on the wall, and the opinions from the pundits, professionals, and polls all indicate a likely Clinton win in New York Tuesday, and a virtual running of the tables moving towards Philadelphia in July.

But if Sanders can duplicate his magic from Michigan and usher in a win Tuesday night, the Empire State Upset may go down as the definitive turning point of the 2016 cycle. At the very least, it will severely jeopardize the former Secretary’s stronghold in the next batch of delegate-rich states — likely minimizing her expected margin to single-digits — and the Sanders revolution will truly expose the frivolousness of polls and campaign cognoscente. With a win in New York, Bernie Sanders will already have “won” the 2016 election nomination process by many standards, far exceeding the expectations of a PAC-less approach to fundraising and winning with a populist effort that flies in the face of party establishment endorsements (only 9 elected Senators, Reps, and Governors in the Democratic party have felt the Bern compared to a whopping 213 for Clinton). Amazingly, the outsider who has created a revolution out of a call for socioeconomic justice may very well be mere hours away from rendering an entire industry of Beltway buffs and prognosticators obsolete, perhaps indicating that his slingshot is far larger than anyone expected.
—