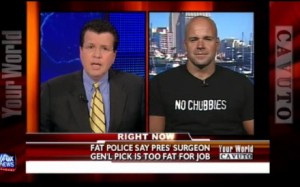 We fell for it, but Big Journalism’s Larry O’Connor dug out the truth, that the full segment revealed Cavuto defending Benjamin, after which O’Connor confronted Olbermann on Twitter. How do you suppose that went?

Believe me, the irony of a Breitbart site calling someone out for not playing the whole tape is not lost on me, but the case here could not be any more glaring. Far from hypocritical, the full version of the clip that Olbermann used shows that Cavuto is remarkably consistent, right down to his comparison of fat-bashing to racism.

In his “Worst Persons” segment, Olbermann plays a few seconds of the tease for this spot, in which Cavuto describes Dr. Benjamin as “not a lot fat, but fat enough  for my next guest to say ‘fat chance,’” but then spends the entire segment mocking his guest’s premise: (from Fox News)

My first reaction, though, was to wonder if Cavuto still deserved scorn for even having the debate about Dr. Benjamin’s weight. Why pluck such a non-issue from thin air, even if only to mock it?

As it turns out, though, Cavuto didn’t conjure the weight question from pure alchemy. Other news organizations and blogs had already raised the issue, with a far straighter face. ABC News presented a rundown of critics and supporters of Dr. Benjamin’s weight-related qualifications, and rather than clearly choosing the right side of the issue, gave it the “he said, she said” treatment for which Fox News is so often derided.

If Cavuto is guilty of anything, it is of using this guy as a regular guest:

Michael Karolchyk is the owner of the Anti-Gym, and while it takes courage to advertise your erectile dysfunction by constantly wearing a “No Chubbies” t-shirt, there’s little else redeeming about the guy. If Olbermann had blasted Fox News for abetting this guy’s publicity-whoring, he’d have been on rock-solid ground. In the case of this particular meme, however, Karolchyk was the perfect guest to shame Regina Benjamin’s mainstream media critics.

Although Olbermann was calling Cavuto out for “hypocrisy,” and not for fattie-bashing, I would be remiss if I didn’t point out that the Countdown host himself is a veritable Masaharu Morimoto of fat-bashing, serving up course after course of bitingly personal comments on the weighty topic. As a regular Countdown viewer, I can attest that there is no shortage of these clips, but this one contains a particularly generous helping:

All this proves, of course, is that Olbermann is also remarkably consistent. Larry O’Connor found out just how consistent Olbermann is when he confronted the host on Twitter (read the full exchange here), and Olbermann denied wrongdoing, while also positing the fallback case that Cavuto had made a “Depends” joke at Sen. Bernie Sanders‘ expense. (The “Depends” remark, though, was actually pretty innocuous, if a bit crude. When I was at the White House last Monday, Sanders’ minibuster was a frequent topic of conversation, and every reporter I talked to, liberal or otherwise, made a remark about Sanders’ need for a bathroom break.)

Earlier this year, it came to light that many of Keith Olbermann’s contemporaries on the left were secretly critical of him, even as I was lambasted for daring to criticize him. If the left wants popular figureheads like Olbermann to retain any sort of credibility, they need to expect more from him. And they need to do so out loud.