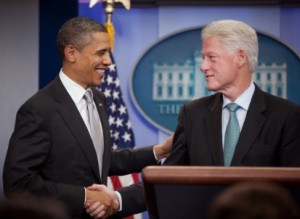 Former President Bill Clinton made headlines Tuesday when he said that, if he was in charge, he would raise the debt ceiling himself under the 14th Amendment, and “force the courts to stop me.”

The idea of raising the debt limit using the 14th Amendment isn’t new, but President Clinton’s declaration significantly alters the political dynamic, giving President Obama either a powerful wild card to play in the negotiations, or an enormous headache. Which it turns out to be depends on whether you view Clinton’s statement as an off-the-reservation outburst, or a coordinated part of the Obama administration’s negotiating strategy.

While the ability of the President to use the 14th Amendment to raise the debt limit is debatable (the Congressional Research Service, among others, says he can’t), Clinton’s construct renders that question moot, at least in the short term, by employing the old maxim that it’s easier to ask for forgiveness than permission. It also plays to the media’s curious fetish for “decisiveness,” demonstrated ad nauseum during the Bush administration. The media, and lots of Americans, loved having a “decider,” even when those decisions were disastrous. They’re much more likely to positively view a decisive action that avoids a disaster. Given that the public is finally starting to understand the seriousness of the default threat, cries of “executive overreach” would likely be offset by the sense that the move was unavoidable.

Raising the specter of unilateral action gives President Obama some political cover to use the 14th Amendment, but it also has the potential to make it difficult for him to pass up the option, as well. If a default occurs, and constitutional Obama decides the 14th Amendment doesn’t permit him to step in unilaterally, Clinton’s words will become politically disastrous for President Obama. Again, the answer lies in former President Clinton’s motivation.

Figuring that out is no simple task. While former presidents are traditionally reticent to wade, unprompted, into policy discussions, Clinton has been a bit of a loose cannon at times. If he was going rogue here, the former President could be creating a problem for President Obama by making it nearly impossible not to go to the 14th Amendment in the eleventh hour. By placing that arrow in Obama’s quiver, Clinton also moves the chains somewhat on how drastic a compromise President Obama can sell to his own base. If people perceive that the President has this ultimate trump card, it will make it harder for him to accept a deal that includes less (or no) revenues than Democrats are seeking.

However, President Obama has demonstrated a willingness to leverage Clinton’s political popularity and skill in the past, so there’s an excellent chance that this was an intentional move, equal parts trial balloon and warning shot. As ABC News points out, the White House has been rather strong in saying that the President won’t use the 14th Amendment:

“It’s pretty categorical. We’re not exploring this. That’s not an option,” White House Press Secretary Jay Carney said Monday. “There is no mechanism that allows us to get around the fact that on August 2nd, if the measures haven’t been taken, we go into default.”

However, the administration’s public statements are necessarily designed to thread a series of ever-smaller needles. First and foremost, they need to avoid panicking world markets, which jumping the 14th gun would surely do. They also don’t want to signal to Republicans that there’s an escape hatch from making the grand bargain the President seeks. In a nutshell, even if he wants to, the President really can’t say he’ll use that nuclear option until he’s actually going to.

President Clinton, of course, is another matter. By setting up the 14th Amendment dominoes, he gives President Obama a chance to gauge public and media reaction to such a move, without damaging his bargaining position or influencing markets. Making the threat by proxy actually might enhance the President’s bargaining position, if reaction to the idea is positive. Making such a decisive move, in the face of economic disaster, could be a huge political win for him, much more so than dragging Republicans a few feet into a compromise that both sides will hate.

In the end, the 14th Amendment nuclear option might be the closest thing to a win-win. It was a mistake for the Republicans to tie deficit reduction to the debt limit, and many would argue that it was a mistake for President Obama to negotiate anything under threat of default. Invoking the 14th Amendment gets everyone out of this hole. It gives Republicans a way out that allows them to stick to their principles, while they lambaste President Obama to their base for overreaching. It gives Democrats a win for standing up for Medicare, Medicaid, and Social Security. President Obama might take a hit for overreaching, but would likely get a bigger “decider bump,” and the American people would get to avoid a global economic catastrophe.