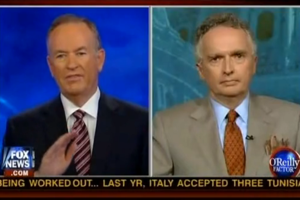 The moral value of journalism always gets a little tricky when it involves uncovering military secrets. When it involves Fox News calling out the New York Times, it mixes in a bit of cultural backlash, as well. Last night on the O’Reilly Factor, Bill O’Reilly had military analyst Col. Ralph Peters on the program to evaluate the damage that a recent NYT story uncovering new covert operations in the Middle East had done to America, and what the Times‘ motive could be for publishing it.

The story, making the front page of yesterday’s Times, alleges that the US military is set to expand secret military operations in the Middle East for intelligence and security purposes. They allege the order was signed by General George Petraeus. This article greatly disturbed Peters, who saw the revealing information as a help to the enemies the covert operations were intended to help. As he put it, “They tipped our secret operations, our black operations approach, to the Iranians, to the Syrians, to the terrorists. It made it much harder, much more dangerous for our agents, for our special operators,” he continued, to collect information.

Asked what good could come out of publishing that sort of information, Peters answered that the New York Times “doesn’t like the military very much,” that they “celebrated” the Abu-Ghraib prison scandal, and that there seemed to be some sort of nefarious intention in revealing the military orders.

It’s worth noting the Times has a long history of uncovering and publishing sensitive intelligence stories and rarely do so without alerting the government and relevant parties beforehand. As a result they also have a history of holding stories if there is a convincing argument to be made that publishing it would put lives in danger.

Video of the segment from last night’s Factor below: