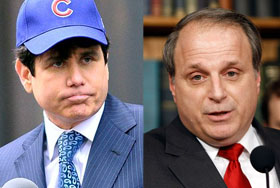 Alex Pareene over at Gawker noted this week that the Eric Massa tickle-sex scandal is the union of every absurd political thing to happen in American history this century (sex, corruption, health care, Rush Limbaugh‘s racism, etc.). He was wrong– until now. The last piece of the puzzle, disgraced former governor of Illinois and news cycle hero Rod Blagojevich, has decided to enter the fray in an interview with Fred Thompson, the former actor who sleepily made a run for the Republican nomination to the presidency in 2008 and apparently has a radio show now. And he knows exactly what Massa is talking about when he says Rahm Emanuel harassed him nude in the showers of the Congressional gym.

Thompson began the interview allowing the governor to indulge in some typical Blago fare (“I’m the anti-Nixon,” “play the tapes”), even going as far as calling Attorney General Patrick Fitzgerald‘s handling of the situation “totally inappropriate,” but choosing to quickly switch gears with Blagojevich to ask about his impression of White House Chief of Staff Rahm Emanuel. Blagojevich often cites Emanuel as a source supporting his claim that he did nothing illegal in his deliberations to appoint a successor to President Barack Obama, and did his best to defend Emanuel’s honor against Massa’s accusations of harassment:

“The idea that Rahm Emanuel would be in the house gym… lobbying another congressman, whether he had clothes on or not, is the reason why I wanted him to be the guy to cut the deal to make the attorney general senator in exchange for jobs and health care and no taxes. Rahm is a tough guy, and he knows how to get things done, and that’s precisely the reason why he was the one I wanted… that story about him in the shower with Congressman Massa sure sounds like the Rahm I know!”

With friends like these,who needs enemies? There is no indication in his tone that Blagojevich was trying to incriminate or hurt Emanuel in any way, and yet he manages to confirm that even if Massa is lying, Emanuel is precisely the kind of person who would intimidate a congressman while in the shower naked, anyway. And that’s why we love him!

Then they took some stabs at Senator Dick Durbin— Thompson called him a “profile in courage;” Blagojevich noted that his loyalty to the Cardinals, White Sox, and Cubs is an apt metaphor for his politics– and departed with Blagojevich meekly requesting some legal help from the host. All in a day’s work for the newly-minted star of Celebrity Apprentice.

Listen to the bizarre Blagojevich interview below: