Blago: To Tweet Or Not To… Oh, Well, Actually You Don’t Get a Choice, Sorry 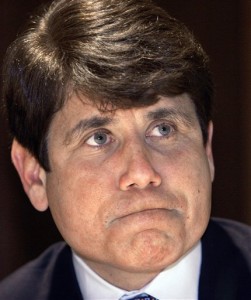 On Monday, newly minted Twitterer and former Illinois governor Rod Blagojevich announced that he planned to live-tweet his federal corruption trial, which got underway this past week. Alas, yesterday, with Blagojevich only one tweet into his trial-cum-new-media-adventure, the judge (who is clearly not sympathetic to the needs of the blogosphere) banned him from tweeting in the courtroom.

Reportedly, his publicist has actually been doing most of the tweeting. Oh, the wasted opportunity. After being chastise by the judge, Blagojevich began tweeting today about the less unique aspects of his life, namely his daughter’s eight-grade graduation.

That said, it’s worth noting that Blagojevich’s short-lived, live-tweeting experiment is only one of many recent endeavors by politicians to demonstrate technological savvy and capitalize on the campaigning capabilities of the new media. In April, the House Republican caucus launched its New Media Challenge designed to encourage party members to expand their online presence. The winner, Rep. John Fleming, was announced today. (He won and iPod, if you’re curious). Not to be outdone, the House Democrats devised a similar contest, The Member Online All-Star Competition, which began this week. The Democrats have a lot of ground to make up, however. The Hill notes that as of last week, well over half the Republican caucus uses Facebook, Youtube, and Twitter, while well under fifty percent of the Democrats make use of the same sites.

One Republican in particular, Rep. Paul Broun (R. Ga.), seems to have the tweeting business under his fingers. Broun live-tweeted throughout President Obama’s speech yesterday, challenging the president’s assertions concerning the coming benefits of the health care reforms:

Donut hole will not be gone. Starting in 2011 the rebate will be replaced by a discount that never completely covers costs. #tcot

Obama just admitted that closing the donut hole will blow a hole in the budget.

Granted, Broun’s live-tweeting consisted of only a handful of posts, but it’s still a better effort than the singular Blagojevich tweet. We’ll just have to hope that however this trial turns out Blago will be quick to regain his tweetdom.