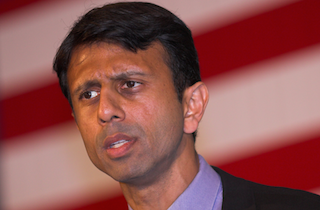 Rather than back away from his disputed assertions about “no-go zones” for non-Muslims in Europe, Governor Bobby Jindal (R-LA) has tripled down, first telling Fox News’ Neil Cavuto that America could soon have its own “no-go zones” and now, in a radio interview with the Family Research Council’s Washington Watch, warning of the coming Muslim “invasion” of the U.S.

Jindal repeated his comments about “no-go zones” in which Muslims are trying to impose Sharia law during the Monday interview, telling those who would do the same here, “If you don’t want to be an American, don’t come to America… If we’re not careful the same no-go zones you’re seeing now in Europe will come to America.”

“They want to use our freedoms to undermine that freedom in the first place,” Jindal said later of Muslim immigrants. “This is a place where you have freedom of self-determination, freedom of religious liberty, freedom of speech. This is an amazing place and we’re a majority Christian country. We’re a Judeo-Christian heritage, but we don’t discriminate against those that have no beliefs and or have different beliefs.”

Jindal said it’s “wonderful” that people “want to be Americans, they join our military, they start companies, they work to create a better community.” But what he said is unacceptable are those who want to “conquer” us. “If they want to come here and they want to set up their own culture and values that’s not immigration, that’s really invasion if you’re honest about it,” he said, saying we can expect more “lone wolf attacks” if that happens.

The potential 2016 presidential candidate predicted that the “politically correct crowd” would call him “racist” for those comments.

Listen to audio below, via FRC: