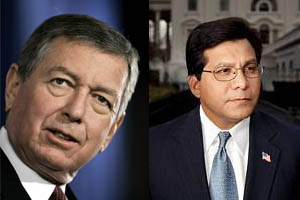 Two years into the Obama administration, President George W. Bush’s newly-released memoirs (and his promotional media tour) have rekindled interest in many of the previous administration’s executive decisions, especially those involving national security. And with the hindsight of two years, President Bush has stood by a majority of his decisions– and within his administration, he’s not alone.

It reminded us that long before Decision Points was on the radar, former Attorneys General John Ashcroft and Alberto Gonzales sat down for a discussion with Mediaite founder Dan Abrams in April 2009 to talk about major decisions during their respective tenures. In their first interview together (live before 2,000 or so people), Ashcroft and Gonzales elaborated in far more detail on many of the topics President Bush is just now opening up about, including the PATRIOT Act, the leaking of secret intelligence, and the legality of waterboarding.

It is clear the topics are as sensitive as they were while he was President, and the same was clearly true when Abrams met Ashcroft and Gonzales to discuss them. Back then, Abrams described the discussion in the Daily Beast as, to put it mildly, tense: “The two men fidgeted. I fidgeted. I pushed and they pushed back. They rolled their eyes and I continued to pursue some clearly uncomfortable topics—the definition of torture, who the attorney general actually works for, and under what circumstances U.S. Attorneys can be fired.”

On waterboarding, both Ashcroft and Gonzales seemed to agree with the President, who told NBC’s Matt Lauer earlier this week that waterboarding was legal “because the lawyer said it was legal.” Gonzales’s answer to the same question– whether waterboarding was legal or to be considered torture– elaborated on the same theme: “The U.S. government provided advice to CIA interrogators based upon the best legal reasoning by the lawyers in the Department of Justice. Was it torture, when that advice was given? No. Were the interrogations harsh? Yes. Did they save lives? Absolutely.” Ashcroft’s discussion on the same matter with Abrams was much more aggressive:

DA: I thought we might get into this discussion of how to define water boarding. Let’s define it.

DA: This is the way it was defined in the memo –

JA: No, no, answer the question!

JA: Come on, Mr. Moderator. Are you a moderator, or are you a proponent?

Finally, Ashcroft elaborated on the legal advice he employed to come to the conclusion that waterboarding was not torture:

“We relied –I relied – on the best judgments of the lawyers in the Department. There are 110,000 employees in the Department, the lawyers are expert, and they came up with an opinion that became part of a memo. Later, some lawyers came to me and said ‘We’re not confident that that memo best expresses the law here.’ And I said to myself, ‘Well, I’m the Attorney General, and if we have stuff out there that’s not the best expression, we ought to amend it. We ought to get the best information we can’… They reworked the memo, and they came a second time, these professionals did, and according to the definition of torture, they came to the conclusion that the procedure as provided along with the advice to our personnel did not amount to legal torture.”

Meanwhile, Gonzales sparred a bit more on the issue of judicial appointments and firings

DA: Let’s assume for a moment that there have been reasons that have been laid out for firing US Attorneys, and those stated justifications, there have been some questions about that, but you’d agree – if the primary reason why they were fired was because they wouldn’t pursue politically charged cases, they would not be proper.

AG: That would not be an improper reason.

DA: Because voter fraud, you’d agree, is a politically charged issue, and it tends to be something Republicans pursue more than Democrats.

AG: But it also happens to be a crime. It’s stealing someone’s vote. There is a law against it. It is okay to enforce that law. And if a US attorney doesn’t want to enforce it, and it happens to be a priority of the President of the United States – you bet.

Pressured on whether he considered this assessment correct, Ashcroft went on to explain the role extremists played in shaping the way the administration behaved and responded to their actions, arguing that “we’re dealing with an enemy that has sworn that they want to destroy us. And they call us the Great Satan, and they have continued to say that they want to fight us and that they want to injure us.” The lack of consideration of this threat before 9/11, he concluded, “cost us greatly.”

Both attorneys general pointed fingers at a lack of communication between the executive branch and other branches of the government, but both Gonzales and Ashcroft, in 2009, stuck to the basic framework of President Bush’s arguments this week: “The President believed strongly that the Congressional leadership was briefed… So, it’s important for you to understand despite what you may read or hear, there was a great deal of effort made to ensure that the Congressional leadership was aware of what the executive branch was doing to protect our country.”