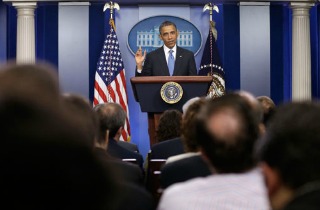 2014 is an election year, but you would never know it judging from the media’s focus in the early days of the new year.

The scandal surrounding New Jersey Gov. Chris Christie has enthralled the political press like no story in recent memory. Since the Bergen Record exposed Christie’s aides taking crass delight in the headaches the closure of portions of the George Washington Bridge had caused a political adversary, the press can focus on little else than the scandal and it’s far-reaching implications.

But Christie is not the only potential 2016 presidential candidate being scrutinized in the press. “Can anyone stop Hillary?” TIME Magazine asked when it published an extensive profile of the leading Democratic presidential contender. The irony that New York Post opinion writer John Podhoretz asked the same question in a 2005 book is lost on no one.

But not all the coverage that Hillary Clinton is receiving is admiring. The glut of recent documents pertaining to the federal government’s response to the deadly 2012 attack on an American consulate in Benghazi has resulted in many pointed questions being asked in the conservative press about the former secretary of state’s competence.

The media’s apparent 2016 obsession probably frustrates the prospective candidates, both of whom would prefer to navigate the invisible primary under the radar. In fact, the only person who it could be frustrating more is the President of the United States. Barack Obama has done everything in his power since the start of 2014 to reframe the political debate in an effort to craft a winning message for embattled Democrats careening toward a tough reelection cycle. The political press does not appear to be listening.

On Wednesday night, Obama met with Senate Democrats to discuss the party’s election year strategy. A strategic focus is critical for Democrats and, at the moment, is sorely lacking. On Wednesday, Obama traveled to North Carolina where he insisted that 2014 would be a “year of action” on job creation. On Thursday, he delivered a speech where he revealed a new initiative to make attending college more affordable. On Friday, the president will outline a set of modest reforms to the National Security Agency’s domestic intelligence gathering programs.

And that’s just this week. Since the president returned from his holiday vacation, he and his allies have been talking up the general election year themes of “income inequality,” the plight of the chronically unemployed, and the need for an increase in the federal minimum wage. While Democrats are still insisting for the cameras that they will not run from the Affordable Care Act in the fall, the actions of the White House suggest that they are desperate for any and every distraction that can possibly take the media’s mind off the problematic implementation of the sprawling health care reform law.

But what the White House does not want is the media to forget, as they have for the moment, that a pivotal election cycle is fast approaching. The media’s apparent infatuation with tearing down Christie may service the Democratic Party in the long run, but it does Obama no favors today. He needs to reframe the 2014 debate around his priorities and not those of the Republicans or the voting public. So long as the press is focused on the race that begins two years from now, they will fail to change the subject today.