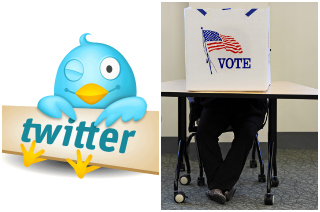 Researchers at Indiana University said they have found a correlation between a candidate’s Twitter mentions and his or her electoral success, a conclusion that could have profound effects on the role of social media—and money—in political campaigns.

As detailed by Alex Roarty in the National Journal, the study tracked House candidates’ rate of mentions on Twitter during the 2010 midterms to their outcome at the polls, and found that—after controlling for variables like incumbency, funds, and media exposure—the frequency of a candidate’s mentions predicted their electoral success in 404 out of 406 races.

This is the first finding that Twitter has a statistically measurable relationship to political outcomes, and the study’s authors say it could help low-funded candidates achieve parity with their opponents. Polling is complicated and expensive, but tracking Twitter mentions is simple and cheap.

Roarty pointed out that polling has other significant uses, massaging candidate messaging among them, but still upheld the potential impact of the study. “Twitter is also often derided as a hangout for political and media elites, producing a debate that bears little resemblance to the thoughts and opinions of most voters,” he wrote. “This study suggests that the social media outlet does provide an accurate reflection of the electorate.”